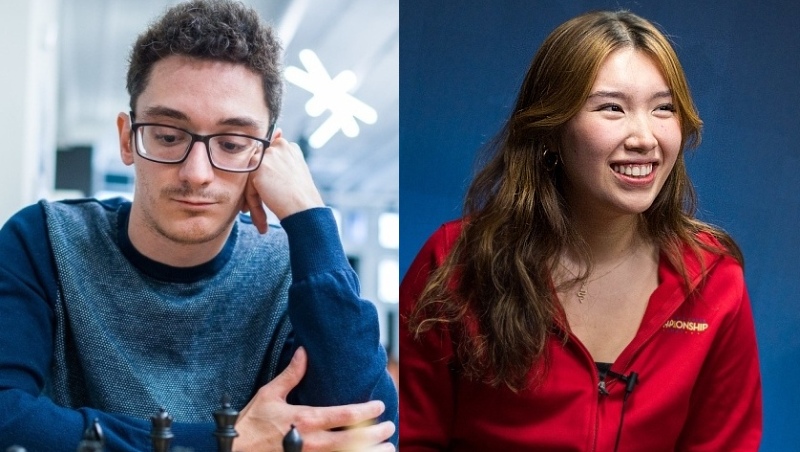 GM Fabiano Caruana is the 2022 U.S. Champion, clinching his second title with a draw in the 13th and final round of the tournament against GM Levon Aronian, a first-time competitor in the U.S. Championship.

The U.S. Women’s Championship was decided in a playoff between GM Irina Krush and WGM Jennifer Yu. Krush drew a hard-fought game vs. IM Anna Zatonskih. Meanwhile, Yu scored a must-win victory vs. WGM Thalia Cerventes, tying with Krush and getting a rematch for the title. 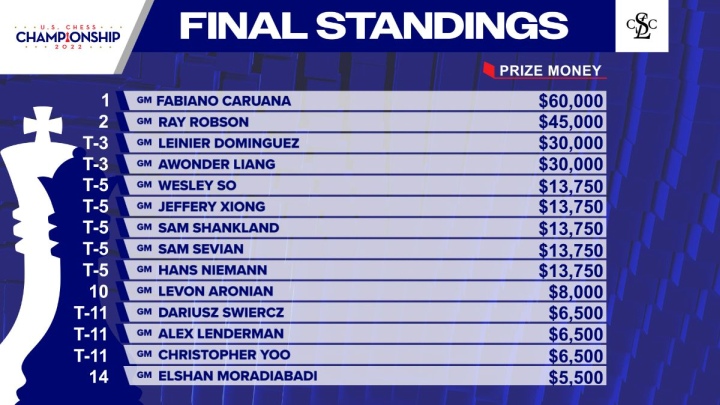 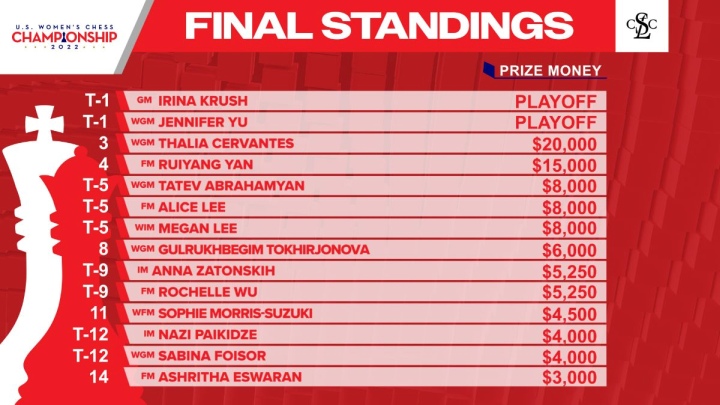 U.S. Women’s Championship – Standings after Round 13 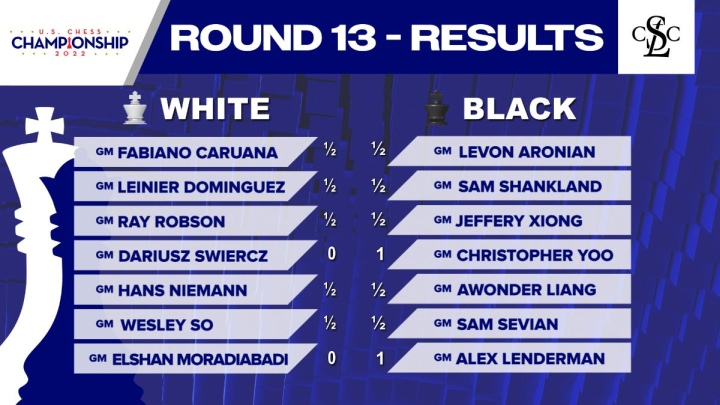 Twelve minutes into the game, the opponents had already played 34 moves into a repetition draw. However, this was not your typical quick GM draw. As Caruana later explained: “Normally I would’ve liked to play, at least a little bit. Of course a draw is a good result in the last round, considering the tournament situation… It’s a big day for Levon, and I thought it would be wrong for me to play this game.” Catch his full post-game interview on our YouTube Channel. 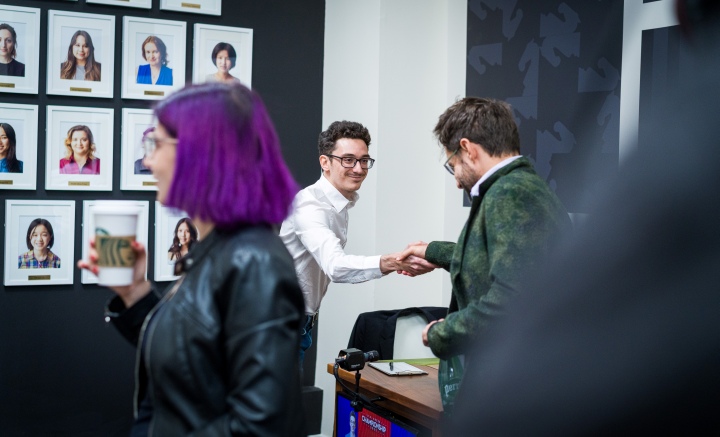 Caruana and Aronian drew before the delayed broadcast even began but for an atypical reason. | Photo courtesy of Saint Louis Chess Club, Lennart Ootes

Ray Robson fought for the win and his chance at a playoff for the title but lost his advantage when Jeffery Xiong counterattacked on the kingside. 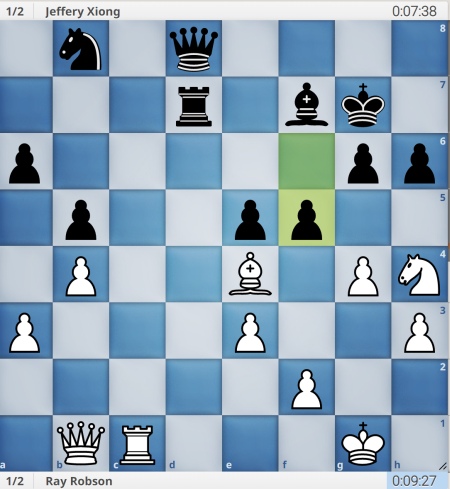 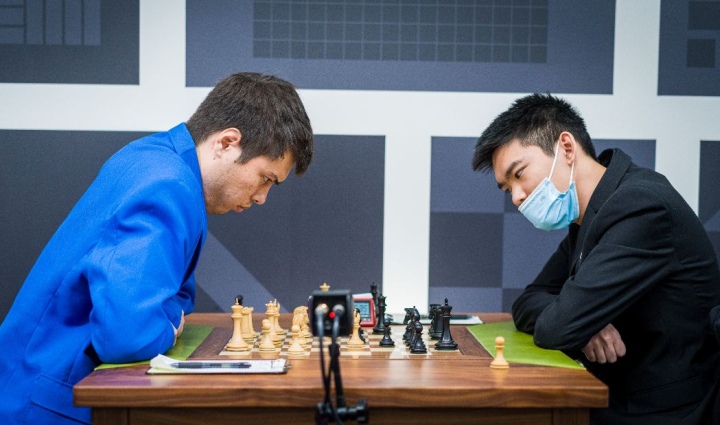 Though they drew, Robson and Xiong came ready for a fight and dueled for over five hours. | Photo courtesy of Saint Louis Chess Club, Lennart Ootes

The youngest player in the U.S. Championship, Christopher Yoo, finished on a victory, winning a tactical game vs. GM Dariusz Swiercz. 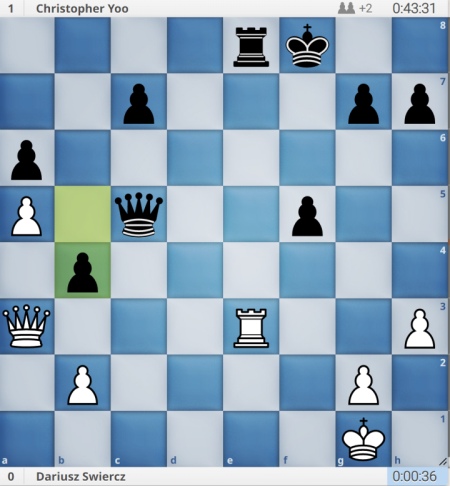 Yoo sealed the victory with 33…b4! breaking the pin on his queen with a double attack against the Swiercz’s queen and rook. | 0-1, 33 moves

Though both players were hoping to have a chance to play for the win, Leinier Dominguez vs. Sam Shankland ended in a 10 move draw. Shankland explains his disappointment with this result in his interview after the game: “I’m sorry for how this ended. I’ve been one of the most vocal critics of people making this Qe4-Qd4 draw in the Berlin. I wrote in my Chessable course that anyone who does this more than once with white just shouldn’t be invited to tournaments. I just felt like I owe the world an apology…”

Aleksandr Lenderman finished his tournament on a victory, battling for the upper hand vs. GM Elshan Moradiabadi for 72 moves.

The rest of the games ended in draws. 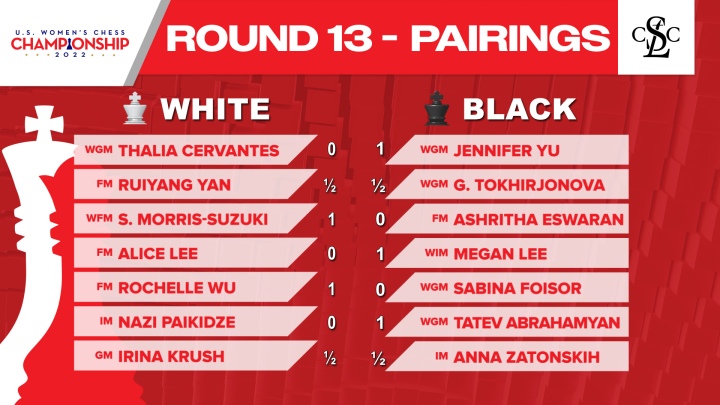 Jennifer Yu won a critical game with the black pieces vs. her closest competitor, Thalia Cervantes. 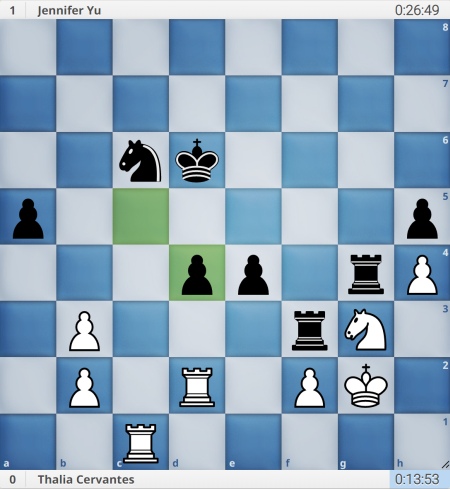 Yu recaptured with 42…cxd4 when she has great pressure on her opponent between her active rooks on kingside outposts and passed d-pawn. After 43.Rc4 d3 44.Ra4 Ne5 45.Rxa5 Ng6, Black’s knight joined the attack, and Yu soon crashed through on the kingside. | 0-1, 57 moves 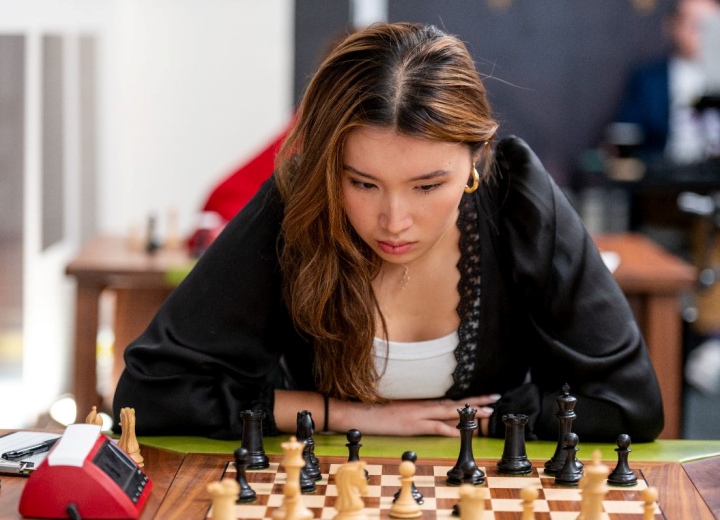 Yu came through in the last round, giving her the opportunity at a rematch vs. Krush for the championship. | Photo courtesy of Saint Louis Chess Club, Crystal Fuller 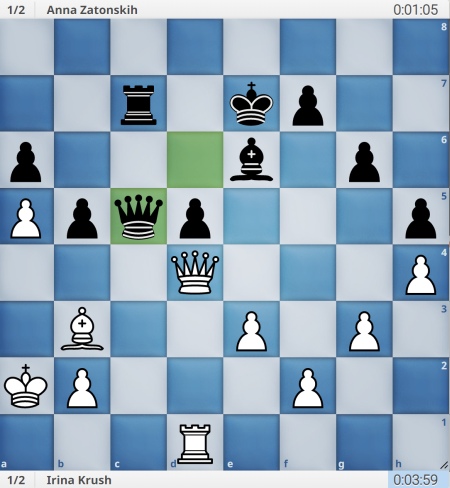 Though Krush pressed her edge with white for a while, Zatonskih consolidated and after 56…Qc5, the players traded into a balanced ending, drawing on move 87. | ½-½, 87 moves 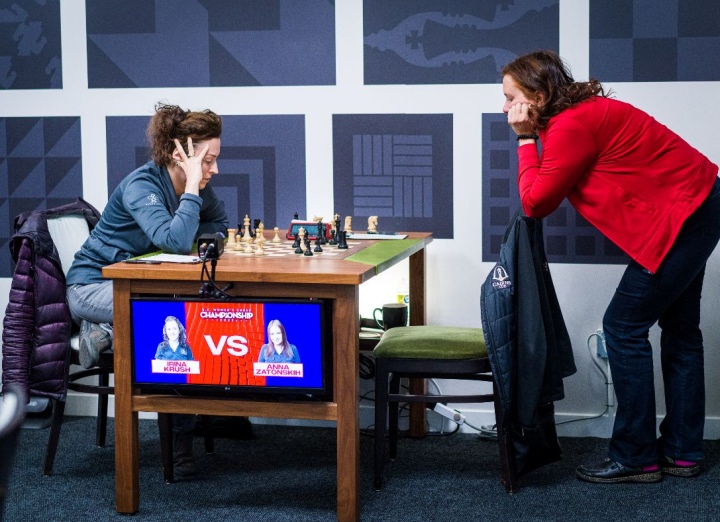 Megan Lee capped off her tournament with a king attack victory. 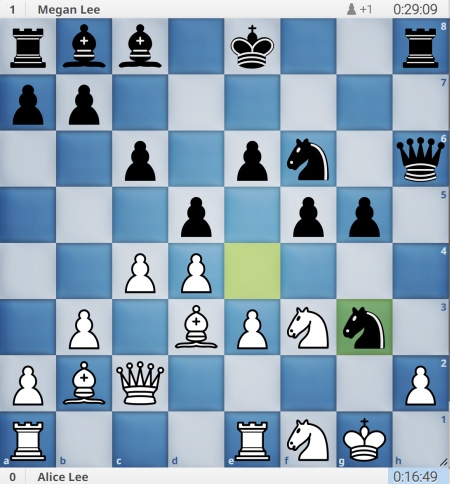 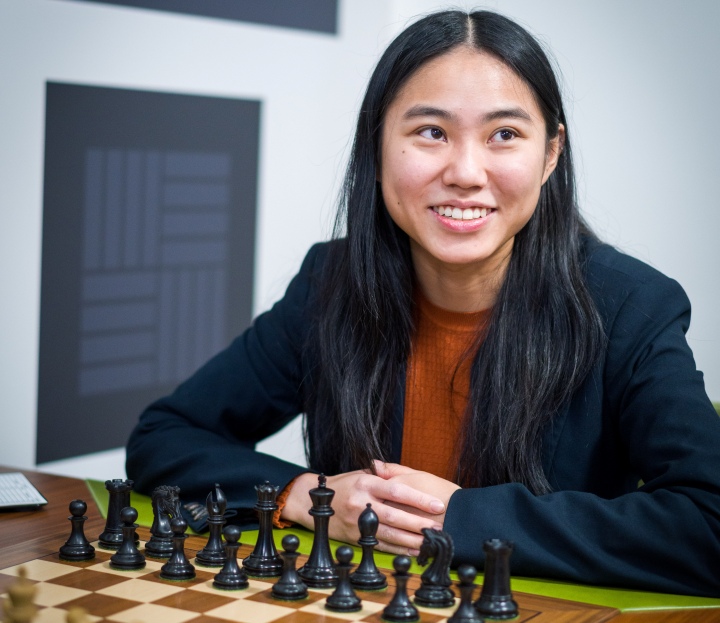 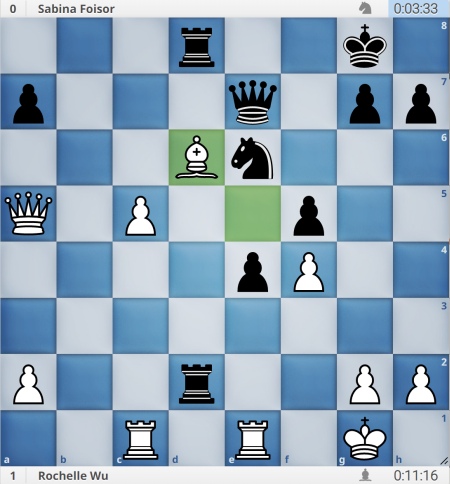 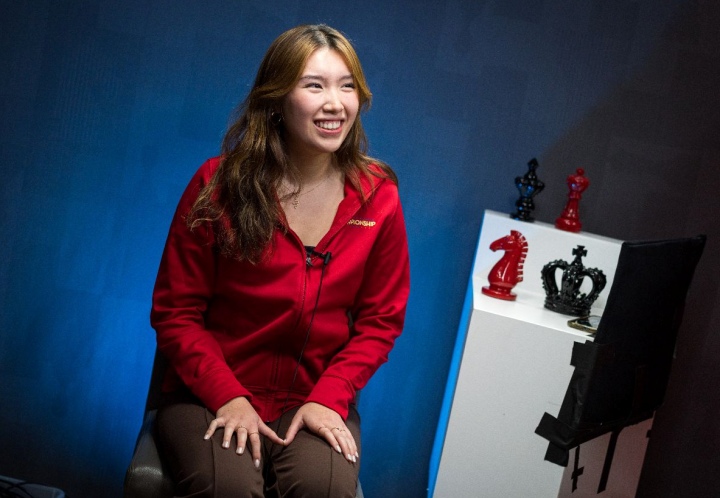 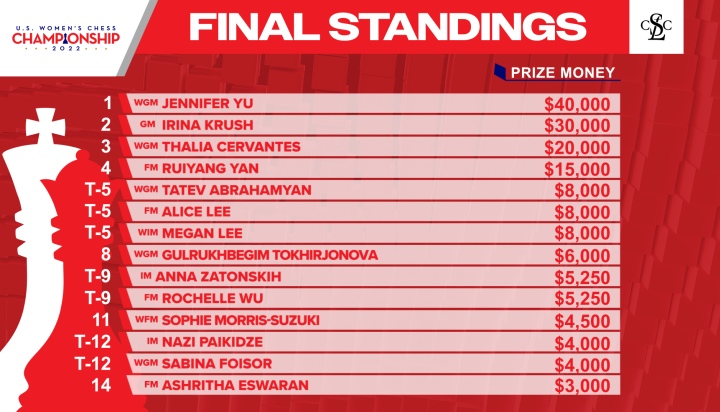 In an incredibly close game with both clocks down to mere seconds, the players repeated the position twice. Jennifer Yu paused. Her 13 seconds began to tick away when she declined the repetition draw offer and found the key checkmating idea. 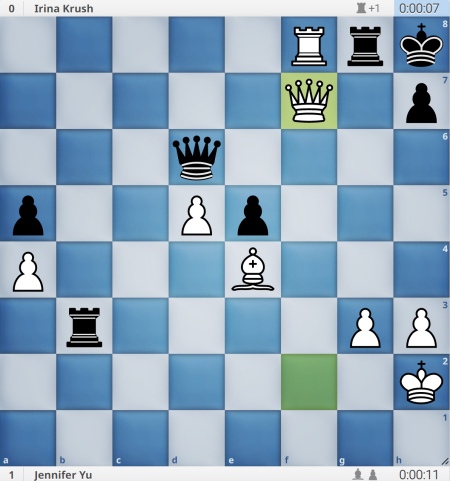 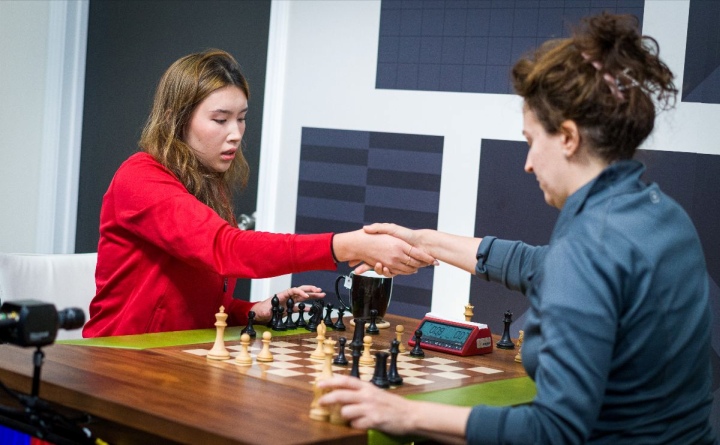 In a must-win position, Irina Krush countered with her own attacking victory, sending the match into an Armageddon tiebreak. 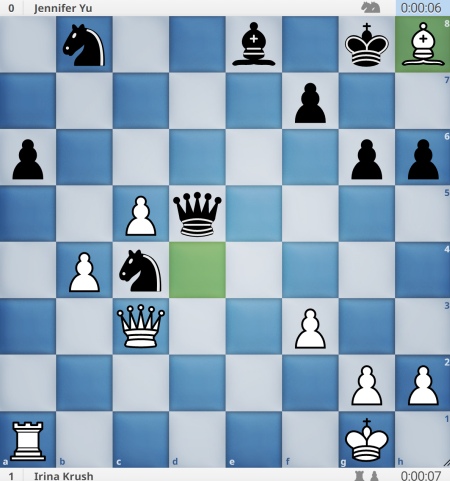 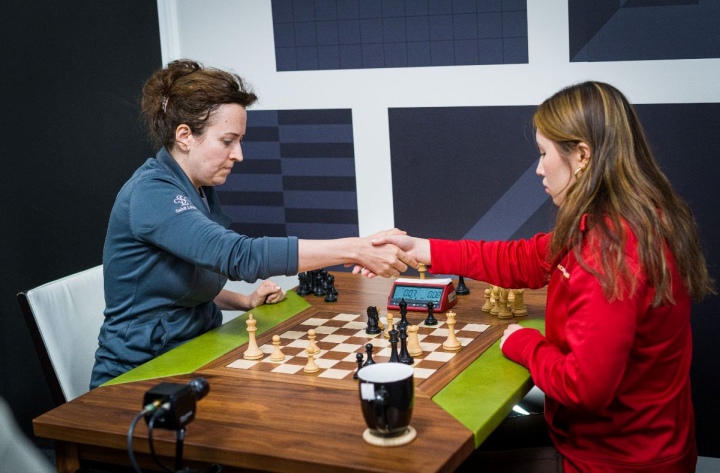 Krush had the white pieces with five minutes while Yu had the black pieces with four minutes and draw odds. The time control had no increment unless the game lasted past the 60th move.

Shockingly, Yu blundered a bishop. Despite this, the players fought on, and Yu defended against Krush’s extra material. In the final position, with two bishops and a rook vs. a queen and two pawns, Krush ran out of time. 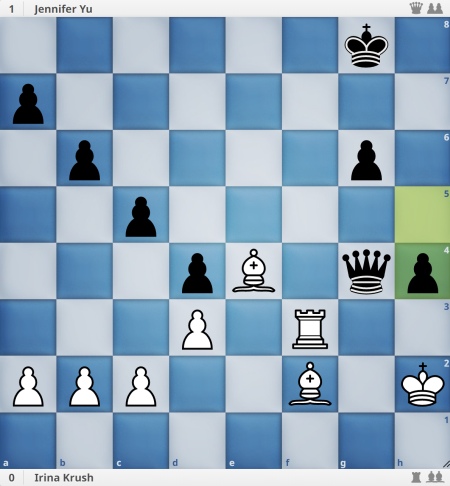 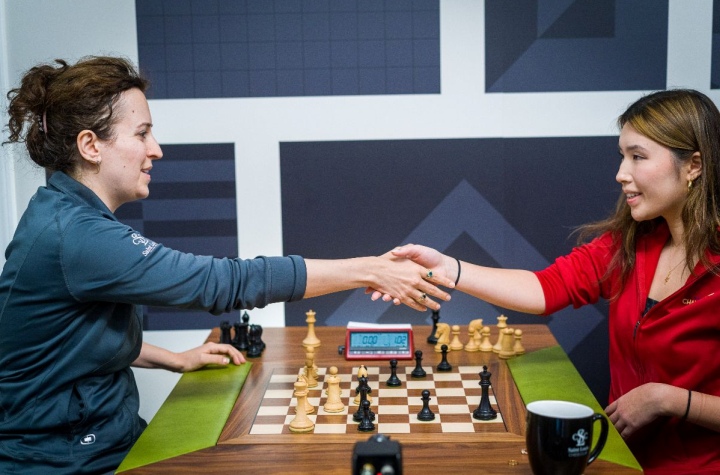