FIDE is excited to announce the composition of the Commissions for the period 2022-2026.

The role of the FIDE Commissions is crucial in servicing federations, improving our technical capacity, and accomplishing FIDE social goals. As the FIDE President Arkady Dvorkovich explains, “the difference between corporations and organisations like FIDE, with an important social component, is that a large share of work is voluntary-based. People who love chess and are ready to devote their time and effort to chess are key to making us succeed. This is why we highly appreciate each and every person who is ready to serve, understanding that any position in FIDE provides a privilege to be part of exciting projects and initiatives, but even more so – it envisages new duties and responsibilities”.

Tiberiu-Marian Georgescu (ROM, pictured below) is the new Chairperson for the TEC Commission, with Hendrik Petrus Du Toit (RSA) as Secretary. Besides being a Grandmaster, Tiberiu has a PhD in Economic Informatics, and is one of the founders of the company “Chess Coders”. At 31 years old, Tiberiu is one of the youngest Chairs, but he will have the opportunity to work hand in hand with one of the most seniors, Andrzej Filipowicz (POL). Named FIDE Honorary Member in 2006, Andrzej remains very much active at 84 years old, and he is always eager to pass on his experience and wisdom to younger arbiters. 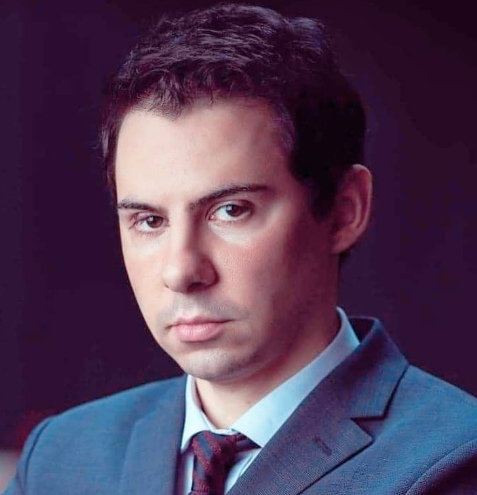 Yuri Garrett (ITA, pictured below), Previously a Secretary for the Fair Play Commission, will now be the Chairman, while Salomeja Zaksaite (LTU) will remain as a member. A very consolidated group, FPL retain its core members. The youngest of them, Bojana Bejatovic (MKD), will now be the Secretary, after having gained a lot of experience at events during the past couple of years. 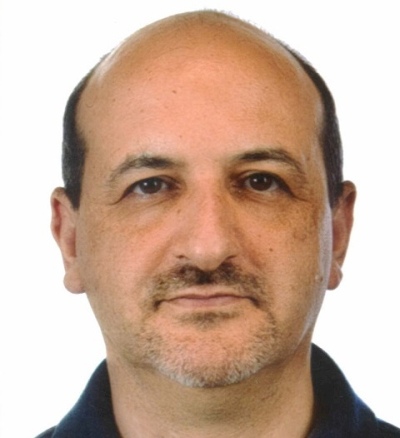 After being a Councillor since 2018, Stephane Escafre (FRA, pictured below) will now chair the Rules Commission. An International Arbiter for two decades, as well as a chess author and a Delegate for the French Chess Federation, he has also been in charge of Fair Play at European events, having a rich and varied experience. Marco Biagioli (ITA), who has been extremely valuable to FIDE in the past four years as Data Protection Legal Advisor, will be the Secretary of the Commission. 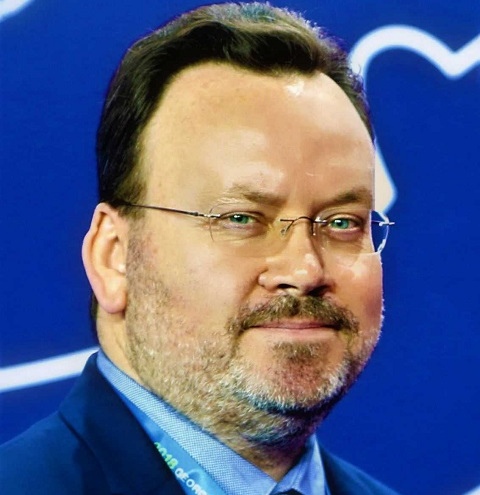 Laurent Freyd (FRA, pictured below) changes hats, and after being the Chairperson of the Arbiters Commission, he will now oversee one of the most important FIDE Commissions: Planning and Development. During his work leading the Arbiters’ area, Laurent demonstrated great administrative and managing skills. This, paired with with IT background, makes him an excellent option for the PDC, where administrative experience is paramount. The Secretary of the Commission will be Kema Goryaeva, one of the most senior and experienced staffers at FIDE. 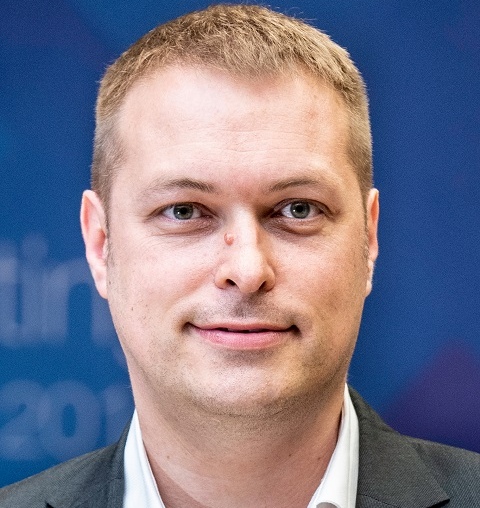 Jerry Nash (USA, pictured below) is now the Chair of the Chess in Education Commission. With a background as a teacher, campus minister, and office administrator, Jerry has been extremely valuable to the Commission as an advisor since he joined the team in 2019 as a “senior adviser”. This role is now taken by Leontxo Garcia (ESP), while Rita Atkins (ENG) joins the team as Secretary. 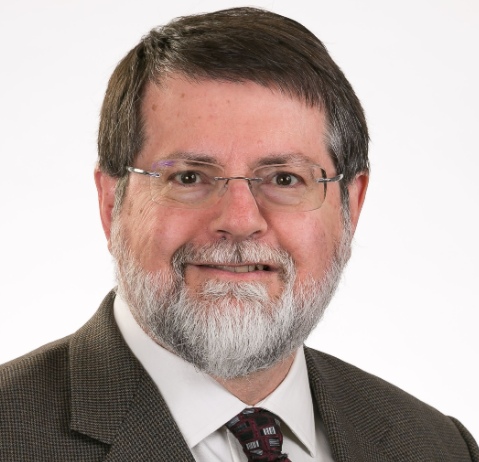 Anastasia Sorokina (AUS, pictured below) is the new Chair of the Women’s Commission. Anastasia’s career over the years has covered many areas, having succeeded as a player, coach, arbiter, organizer, and federative. In the past few years, she has also been heavily involved in several FIDE projects, particularly the ones related to social projects and education. This puts her in an excellent position to have a global perspective of what is needed to bring more women to all areas of chess. The new Secretary will be Shadi Paridar (IRA), who is currently the Vice-President of the Iran Chess Federation. 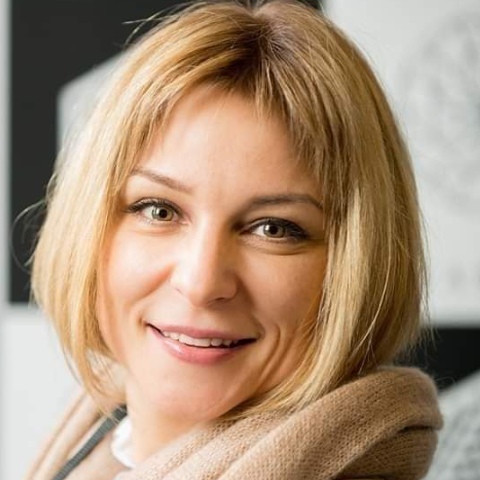 Ivan Syrovy (SVK, pictured below) will Chair the Arbiter’s Commission for the next four years. Ivan had not previously been involved in the work of the Commission, but since obtaining the title of International Arbiter in 2009, he has been as a Chief Arbiter in multiple events, including some that are part of the World Championship cycle, like the Grand Prix in Berlin. His performance has always been impeccable, earning him the respect of all his peers. Nebojsa Baralic (SRB) will continue in his role as Secretary. All the Councillors have been renewed. 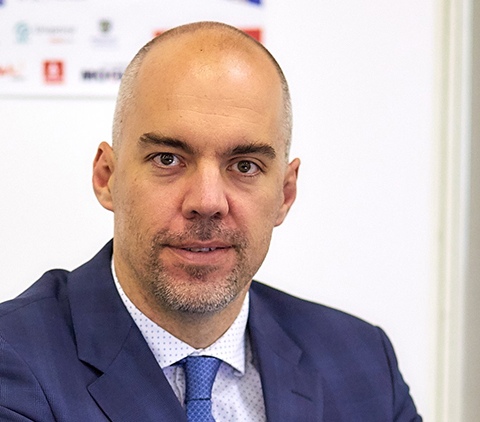 After having been a FIDE Vice-President, a member of the DIS Commission, and organizer of countless chess events, our tireless colleague Akaki Iashvili (GEO) (pictured below) will juggle his work as Special Tasks Director with being a Chair of the Events Commission. Akaki has found himself in the role of Director of many of these events in recent years, so very few people have comparable experience. His predecessor, Ozgur Solakoglu (TUR), will remain connected to the Commission as Honorary Chair, while Yana Sidorchuk will be the new Secretary. 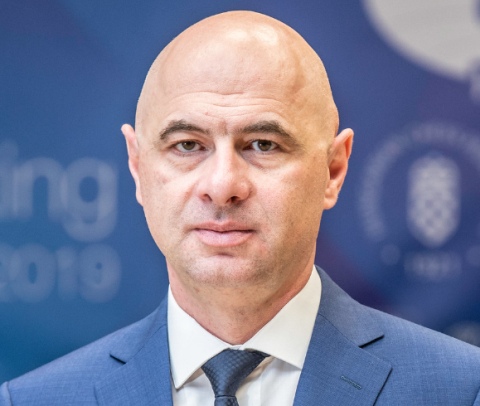 As was announced during the past months, Sami Khader (JOR) was appointed Chairman of the FIDE Trainer’s Commission back in September, Sabrina de San Vicente (URU) chairs the Qualification Commission since April, and Geir Nesheim (NOR) was appointed last March as Chair of the Social Commission. Ahmed Adly is the Chairman of the Athletes Commission; note that contrary to most Commissions, members of ATH are selected in an electoral process. Thomas Luther (GER) will continue in his role as Chairperson of the FIDE Commission for the Disabled, Emil Sutovsky (ISR) will head the Global Strategy Commission, and Dr Marape Marape (BOT), will serve once again as Chair of the Medical Commission.

According to FIDE Handbook, President appoints the Chairperson, a Secretary, and up to 3-4 councillors, who are voting members. Continental Federations can also appoint a non-voting member to each commission. The rest of the positions are filled after extensive consultations with Chairpersons, Continents and Federations. FIDE also received multiple suggestions from individuals. We would like to express our appreciation to all those who were part of the process and provided their input.

When deciding about the final composition of the Commissions, the following principles have been taken into consideration, trying to find an optimum balance and making a compromise when necessary:

– Proficiency of the candidates, including their former track record and relevance to the ongoing projects or expected areas of development; and/or management skills and availability to carry out professional and largely voluntary work for FIDE.

– Geographical balance – all continents are represented in each commission.

– Gender balance – the less represented gender in each commission should not go below a 25% representation.

– The number of members is established in approximately 20 for each commission, even though some flexibility is allowed to make room for Councillors. Chairpersons are also allowed to engage external experts when needed for specific projects, task forces or working groups.

8 of the 15 Commissions have just seen a new Chairperson appointed, while another 3 (Trainers, Qualification Commission, and Social Commission) had already been renewed during  2022. 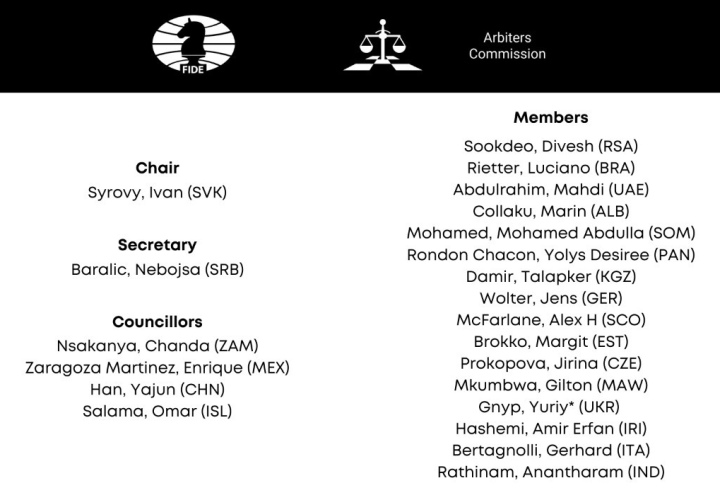 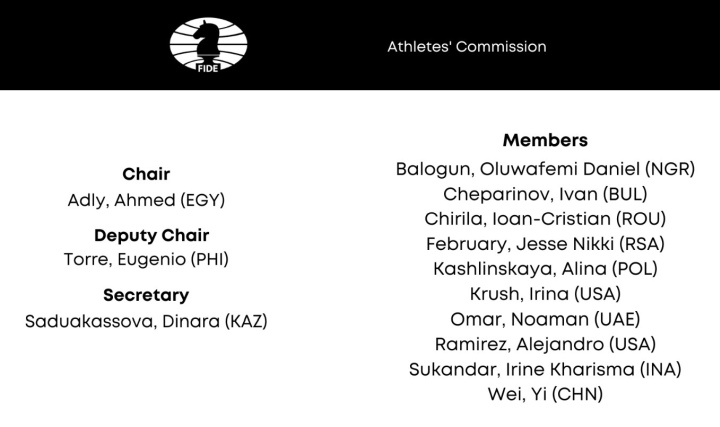 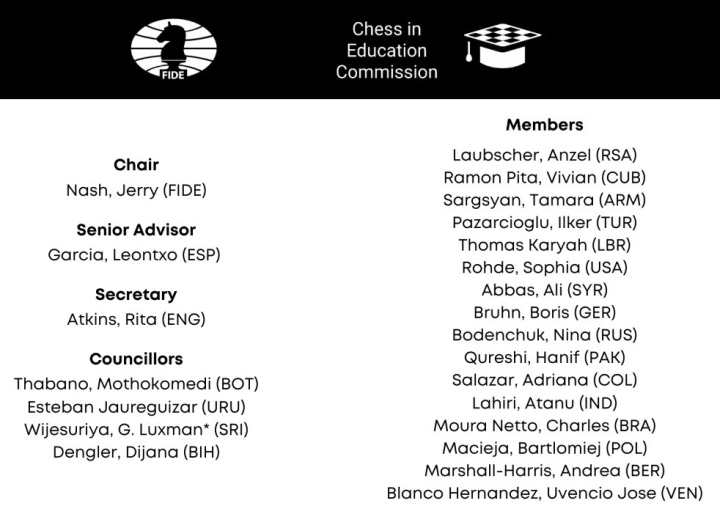 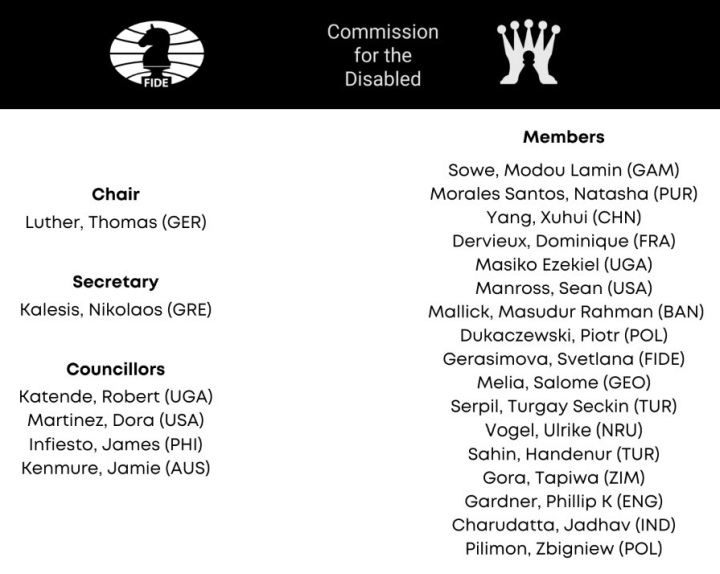 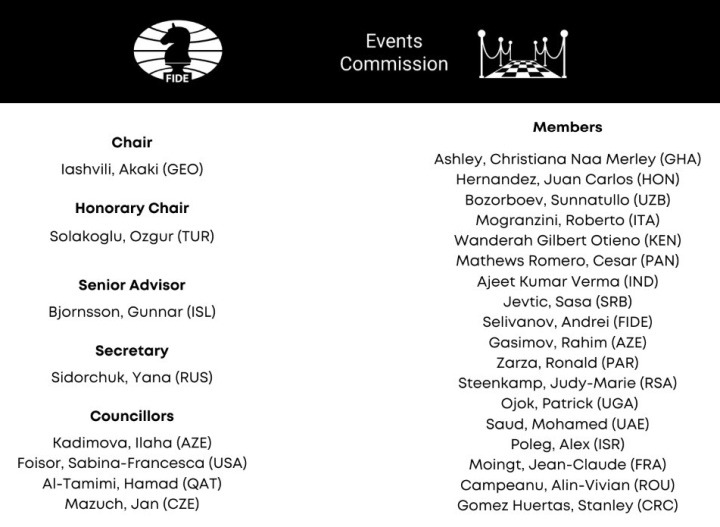 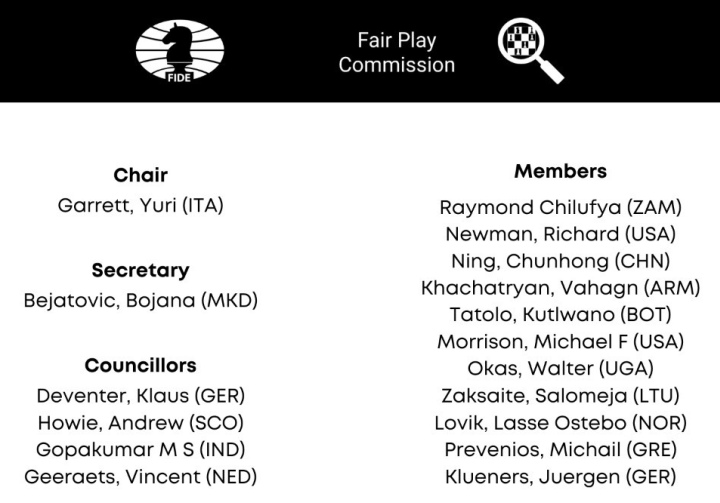 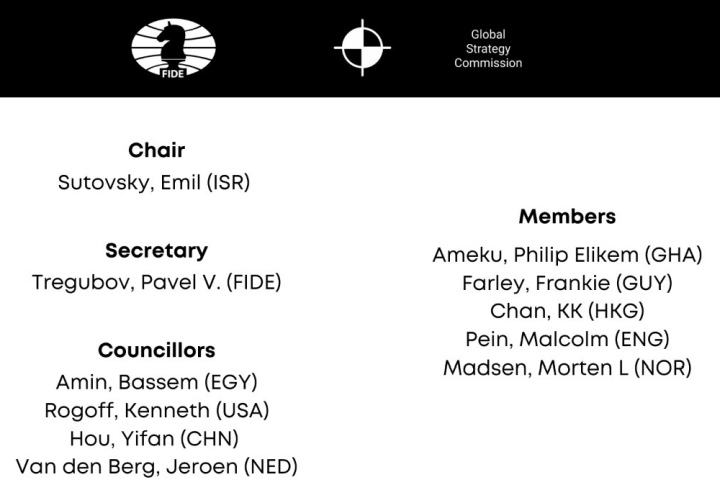 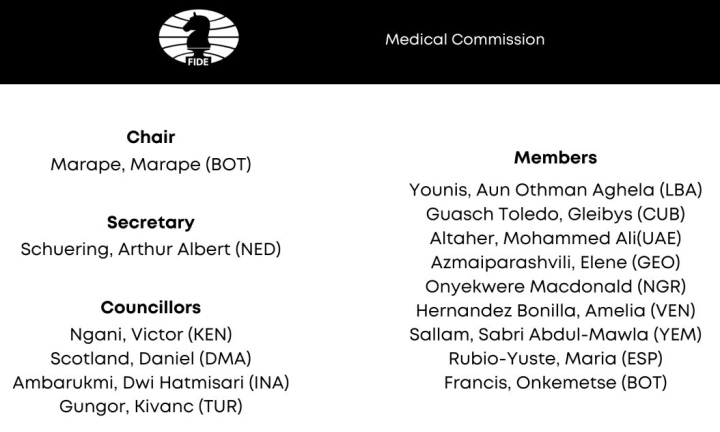 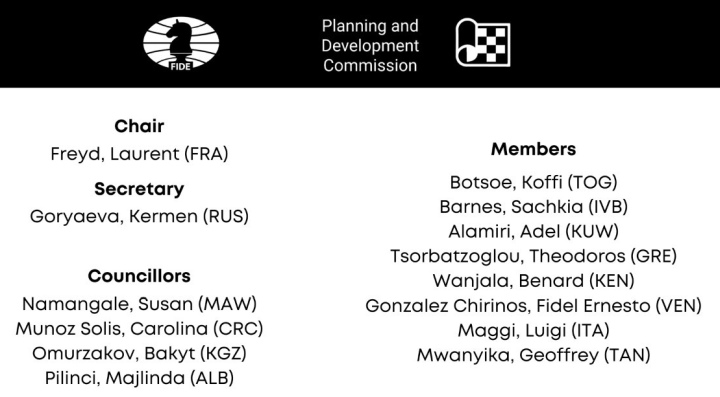 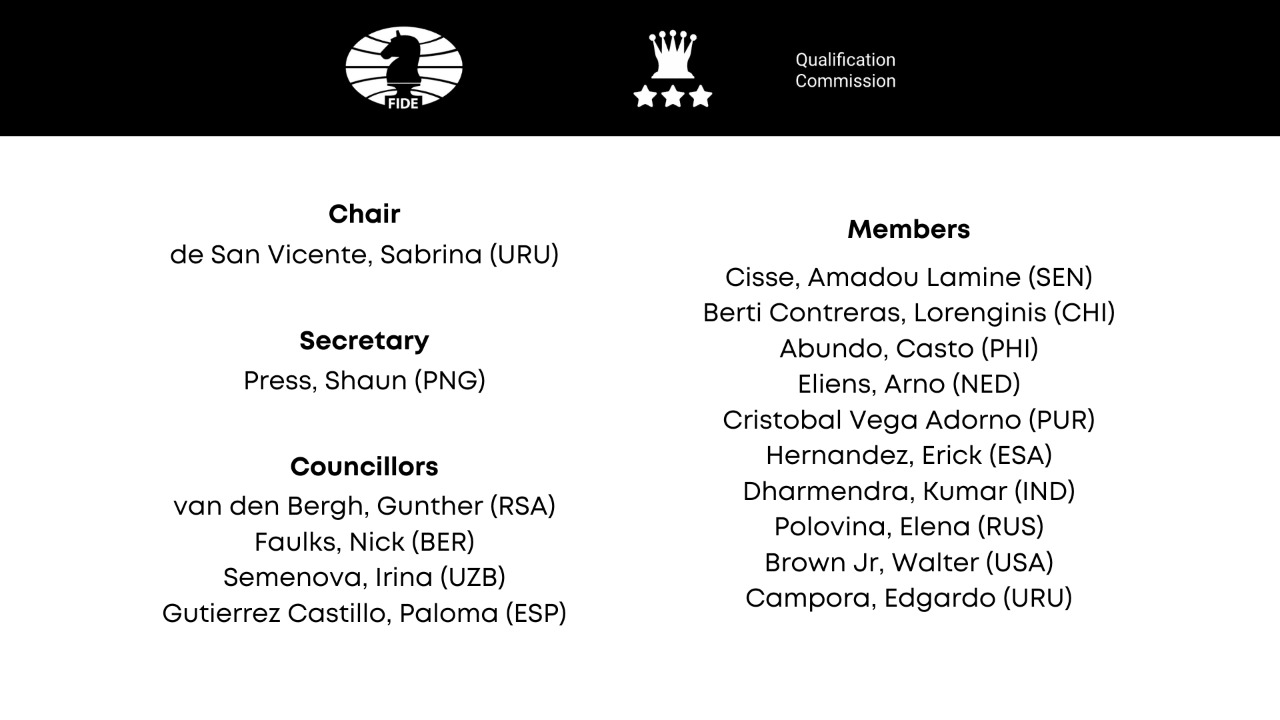 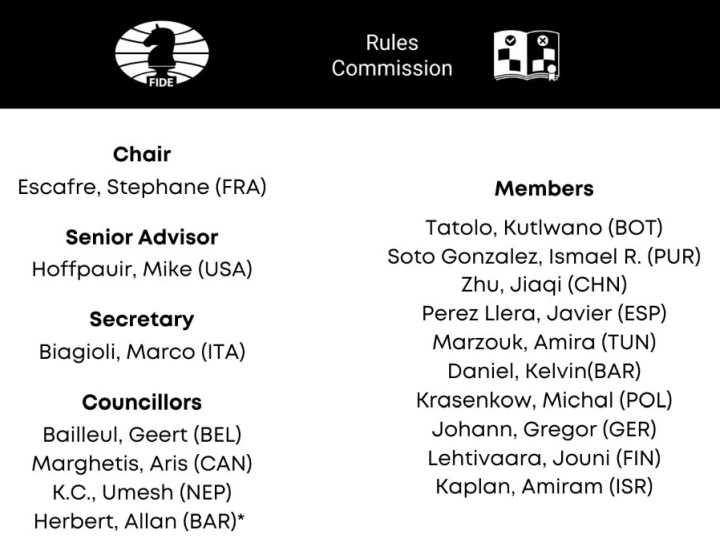 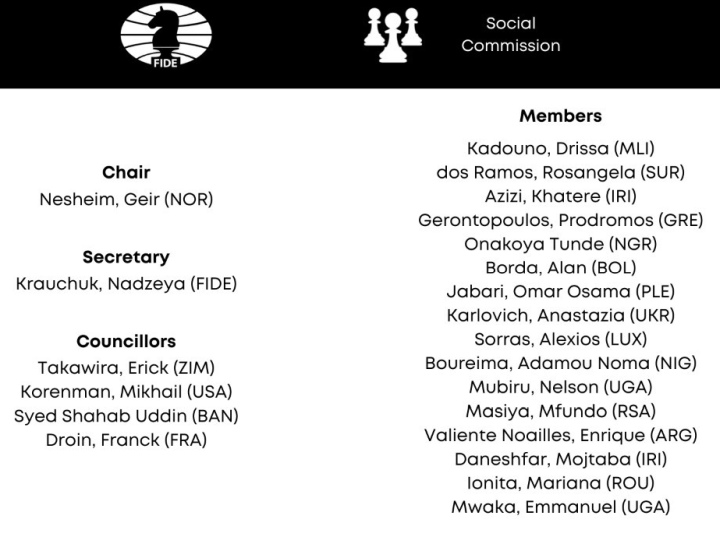 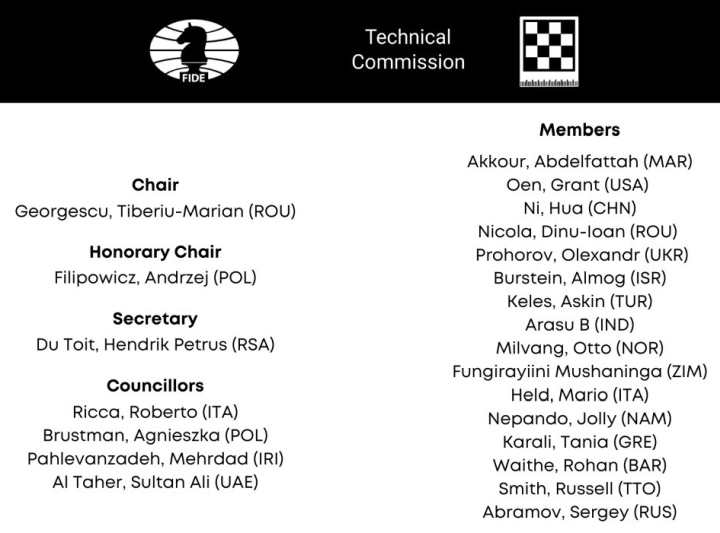 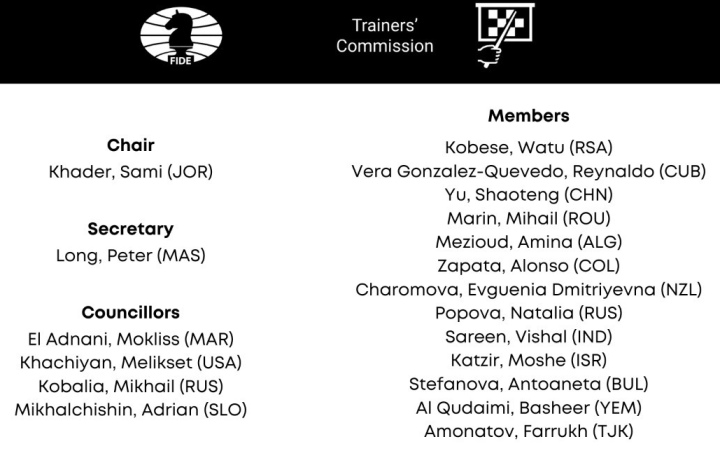 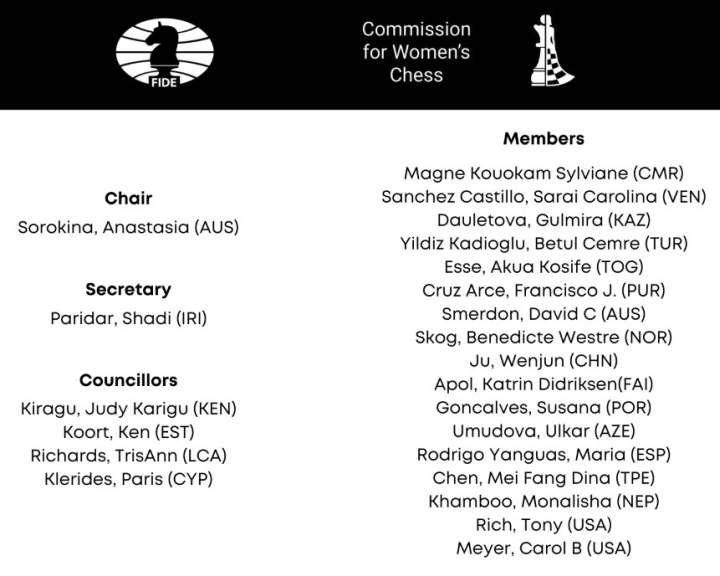