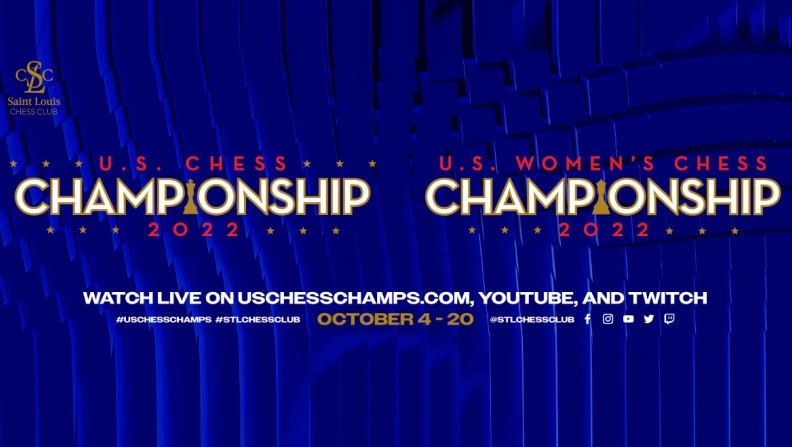 America’s strongest chess players enter to find fish swimming through a giant mechanical clock. Sharks loom above grandmasters. Chess celebrities are photographed before colossal projections of octopuses and jellyfish. Where are we? The opening ceremony for the 2022 U.S. Chess Championships held at the St. Louis Aquarium at Union Station, a space of wonder and imagination, fitting to celebrate the ultimate game of the mind.

In Round 1, young grandmasters Sam Sevian and Hans Niemann took the lead as the only winners in the U.S. Championship.

In the U.S. Women’s Championship, many of the players were out for glory, kicking off the tournament with four decisive games.

The opening ceremony began with a speech from Rex Sinquefield, co-founder of the Saint Louis Chess Club, welcoming US Chess to the city for their new headquarters. Rex went on to announce an ongoing expansion of the chess club, which parallels the current state of growth of American chess overall with GM Levon Aronian making his first appearance at the U.S. Championships, four players who’ve ranked within the world top ten competing, and a host of talented up-and-comers fighting for the crown.

Sevian refused a repetition draw offer vs. GM Elshan Moradiabadi and pressed on for a win, eventually finding a way to break through on the kingside.

Niemann got the better of GM Christopher Yoo in a highly dynamic and chaotic middlegame.

With 40…Re8, Niemann consolidates his material advantage, and his active rooks take over.  | 0-1, 55 moves

In his interview after the round, Niemann’s only comment on the game was, “It was such a beautiful game I don’t need to describe it.”

All of the other games ended peacefully.

Newcomer and youngest competitor, FM Alice Lee, gained the very first victory of the event in a thrilling game vs. FM Ashritha Eswaran.

In the opening, Eswaran delayed development to push her kingside pawns up the board toward Lee’s castled king. Lee responded by running her king back towards the center, allowing Eswaran to break into her kingside and gain a rook on the seventh. With both kings in the center, the game spun into chaos with both sides attacking each other when Lee discovered a beautiful tactical sequence.

WGM Begim Tokhirjonov trapped WFM Sophie Morris-Suzuki’s bishop in the middlegame and then capped off her victory with a picturesque mating combination.

The last game to finish was well worth the wait. Jennifer Yu displayed stunning endgame technique with just seconds left on her clock to defeat second seed IM Anna Zatonskih after over five hours of battle.

WIM Megan Lee scored an upset victory against FM Rochelle Wu while the rest of the games ended in draws.