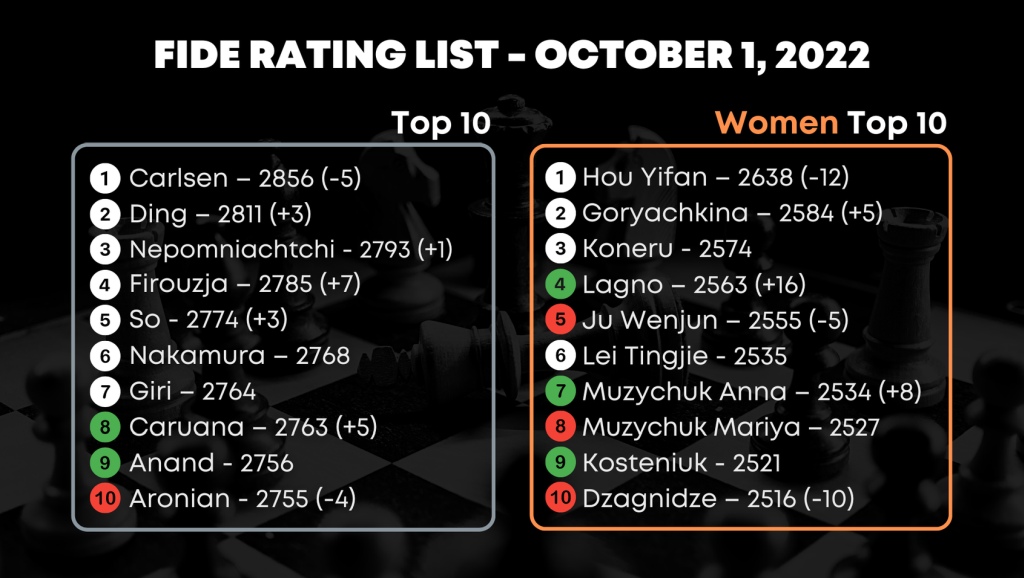 Vishy Anand reappears in the top 10 Open for the first time since October 2019 – the biggest change in both top 10. Alexandra Kosteniuk is also back into the women’s top 10 following her good performance in Astana.

As we predicted in the previous edition, it did not take Vincent Keymer long to hit 2700-mark – after picking 7 rating points in Enea Ekstraliga 2022, he joined the 2700 club.

Monika Socko (pictured above) won this category following her brilliant performance at the European Women’s Championship, where she achieved probably the greatest success in her career and picked up 18.6 rating points (later on she netted another 15 points in Enea Ekstraliga 2022).

Her compatriot Alexandra Maltsevskaya also did a great job in Prague earning 33 rating points. The same applies to Lilit Mkrchian and Ulviyya Fataliyeva, who increased their rating by 17 and 14 points, respectively.

Somewhat surprisingly, the biggest rating beneficiary of the recently ended FIDE Women’s Grand Prix Astana is not the winner of the event, Kateryna Lagno (16+ rating points – an impressive gain by any standards) but Dinara Wagner (pictured above). The German WGM shared 6-8th places but netted impressive 32 rating points partly because of the so-called low-base effect.

Zhu Jiner (pictured below) also turned in an excellent performance in the capital of Kazakhstan, picked up 20 rating points and consolidated her top position in the junior women rating list.

Rameshbabu Praggnanadhaa keeps steadily climbing in the rankings. Following his solid showing in Dubai Open, he got 11 rating points and 66 points since March.

The Indian youngster became the primary beneficiary of the new rating regulations for Rapid and Blitz tournaments. Thanks to the 100-point rule (if a player had their rapid/blitz rating more than 100 points below classical, it was changed to be exactly 100 points below classical) that came into force on October 1, 2022, he improved his rapid rating by 660 points overnight.