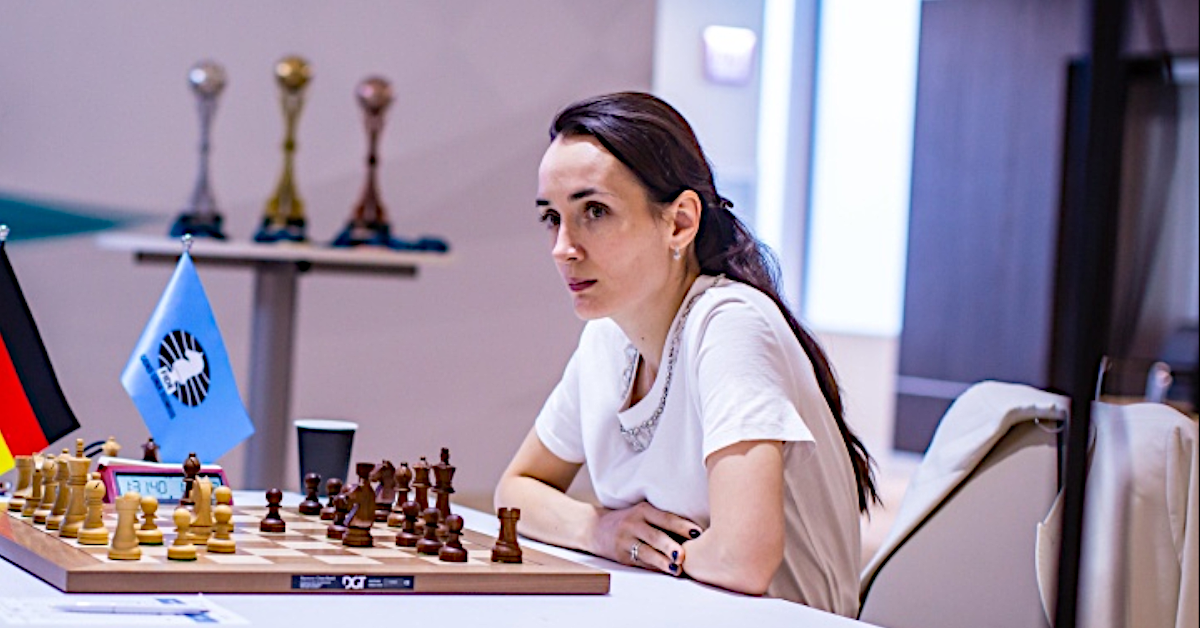 Three players tied for first in the Astana Women’s Grand Prix with four rounds to go.

Grand Prix events are long and tiring. Eleven games plus travel essentially means two full weeks abroad, in addition to time allocated for training purposes. The free day at the halfway point of the event is very much appreciated by the players – and officials/volunteers – to recharge their batteries for the last rounds.

Most of the players hang around the official hotel, relaxing, maybe watching a movie, or using the gym. Nonetheless, the tournament organizers happily provided a bus and a guide for a wonderful three-hour trip to visit the city’s highlights. Getting to know the city where you are playing is a must for most of us, and Astana doesn’t let you down.

Back to today’s seventh round, the Minister of Culture and Sports of Kazakhstan, Dauren Abayev, made the ceremonial first move today in the games Abdumalik vs Kosteniuk and Assaubayeva vs Shuvalova.

To date, Zhu Jiner and Vaishali had only faced each other once, in the Hou Yifan rapid play challenge in 2021, in which the Chinese wonder girl emerged victorious. In today’s game, Vaishali mixed it up and went for the Sveshnikov variation, diverting from the Accelerated Dragon she used successfully in the first round against Lagno.

It quickly became clear that both players had prepared very well: they blitzed out their first twenty moves, following several games played by the mighty Ivanchuk, and eventually went for a forced mass piece simplification. An uneventful draw was agreed on move 31 in a completely equal rook ending.

Vaishali spent less than 25 minutes for the full game: impressive opening preparation with Black. With this result, she remains on 50% in the middle of the standings while Zhu Jiner maintains her spot at the top.

Dominating her opponent by 3-1 in classical games and also many rapid and blitz games, Alexandra Kosteniuk has always been a tough rival for Kazakhstan’s number one female player. In addition, Kosteniuk has been crushing with the Black pieces here in Astana, although her performances with White have been much less impressive.

In the second game to finish, Abdumalik surprised her opponent with the rare 5.Re1 side-line in the Italian opening. I noticed in the playing hall that Kosteniuk took a moment before responding 5…Ng4 but then blitzed out her next moves: a piece sacrifice was in the making.

Zhansaya was playing very fast: it was clear that she was in home preparation, but the position seemed quite dangerous for White. She won a pawn but had to weaken her kingside to hold it. In the commentary booth, GM Ilya Smirin believed that she had a very dangerous position.

After 16…g6! White’s position was crumbling, and after 17.Qe1 Abdumalik was lost, although the alternatives were not much better. With the piece sacrifice 17…Nxg4, Kosteniuk opened the way for the rest of her pieces, and the game was essentially over.

“In modern chess, to win with Black is quite an achievement,” Kosteniuk stated in her post-game interview.

Today’s game was an important one for Poland’s number one female player. A win with Black against out-of-form Tan Zhongyi would catapult her to the head of the table. Kashlinskaya took advantage of the free day to refresh her knowledge of the Semi-Tarrasch variation of the Queen’s Gambit, which, according to my database, she had only played once against Goryachkina in 2013.

Her opening decision definitely came as a surprise for Tan Zhongyi. Faced with a choice of variations, she opted for the solid 5.e3 and 6.a3 line and the game transposed into a variation of the Queen’s Gambit Accepted, which also isn’t a regular line in Alina’s repertoire.

Black did get the bishop pair but fell behind in development. However, Tan Zhongyi couldn’t capitalize on her initiative, and, with a symmetrical pawn structure, the position fizzled out into an equal endgame.

Just when the draw seemed to be the most logical result, Kashlinskaya misplayed her chances, and suddenly, her king was in danger: pawn sacrifices were needed to avoid a direct disaster, and Tan Zhongyi didn’t let her second chance go away. The Chinese GM shared her thoughts about the game in a short interview.

For the third time in the event, Dinara Wagner chose the Catalan Opening for today’s important game against Lagno. Well-prepared, Kateryna went for a new and very aggressive stonewall setup with Black, launching her kingside pawns against White’s castled king: Lagno was going all-out for the win from the get-go.

15…h4! might have been an improvement, but Black’s slow play on the queenside allowed Wagner to break open with 19.f3! and get back into the game. Once again, very low on time – Wagner’s plague in the tournament – she sacrificed a pawn for the attack, but her own king was also very weak.

“My king was unsafe. If I missed one check, it could not be good. So, I tried to focus until the very end,” explained Lagno in her post-game interview. At some point, Wagner’s plan backfired, and Lagno was in the driving seat, bringing back the full point.

With this important win with Black, Kateryna Lagno ties for first with Goryachkina and Zhu Jiner, with four rounds to go.

This match-up is a classic. They have been facing each other for the past ten years with a more or less equal record. But while Goryachkina is leading the tournament, Paehtz is in need of points: she is currently on -2.

Things started off well for the top German female player: in an Exchange Slav, she developed a strong initiative on the kingside and Goryachkina was on the defence. But Aleksandra pulled herself together and gradually improved her position, to a point where she was even much better: