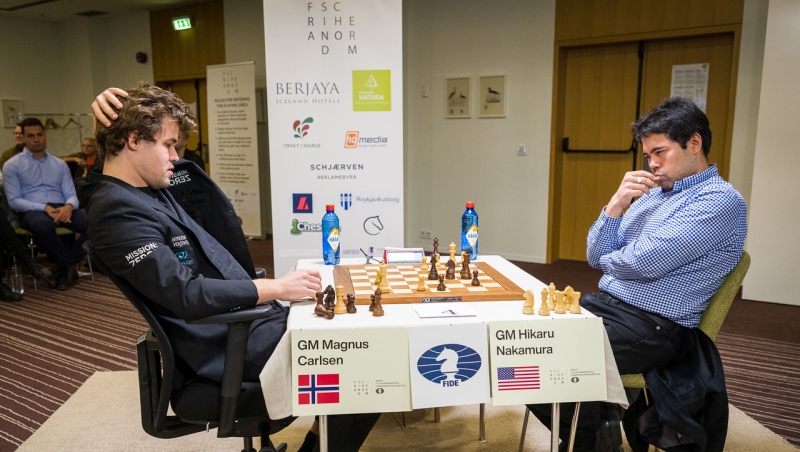 The final day of the group stages of the FIDE World Fischer Random Chess Championship saw three of the heavy favourites advance to the knockout stage, joining Uzbekistan’s teenage sensation Nodirbek Abdusattorov in the semifinal.

Classical world champion Magnus Carlsen, his previous challenger Ian Nepomniachtchi, and speed and Fischer Random chess wizard Hikaru Nakamura all booked their spots in the final four, but there was no comeback for titleholder Wesley So, who could not recover from his shaky form earlier in the event.

So started the day on the brink of elimination from the knockout stage, almost certainly needing to win both of his mini-matches to have any hope of advancing and continuing his title defense.

The bottom men in each group, Matthias Blübaum and Hjorvar Steinn Gretarsson, had little chance of avoiding a final day play-off match for 7-8 place, but if they finally converted the kind of chances they had generated earlier and scored some points, they could have a decisive say in who gets to play for the title.

Tension – and signs of nerves? 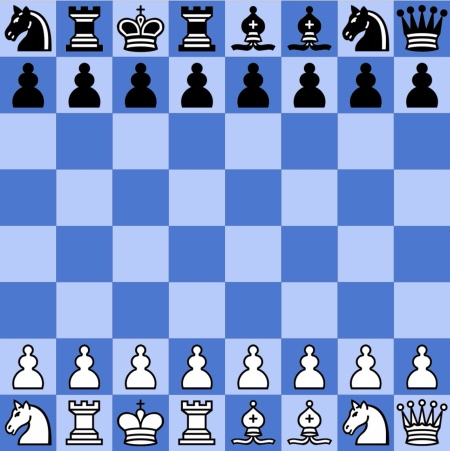 Those with a keen memory for Fischer Random may find the initial position for Round 5 familiar – the players certainly did. It was nearly the same as the one that appeared for Round 3, which Vladimir Fedoseev and Magnus Carlsen rated as one of the worst possible starting positions. The only difference here is in the right-hand corner, where the knight and queen have switched places.

Fedoseev seemed almost offended by yet another troublesome setup, saying, “We have the worst possible positions in Fischer-Random for the third straight day. It’s absolutely ridiculous. For me, as a lover of this game, it’s a big upset.” Fascinating to see that some players already have enough immersion in the game to have strong attachments to certain starting formations. 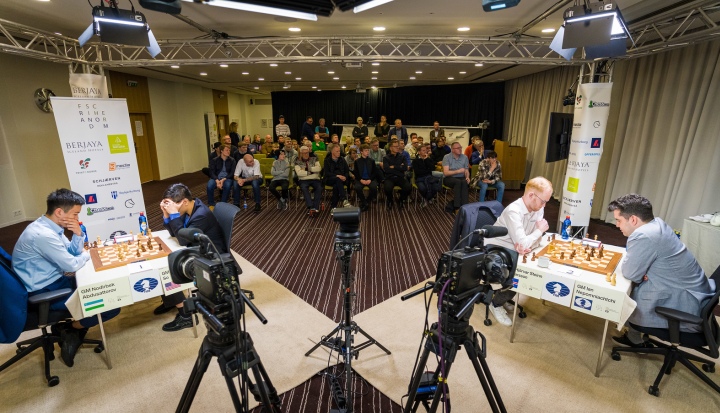 The first game of the round delivered in terms of excitement and drama. In Group A, the unstoppable Abdusattorov won yet again, Ian Nepomniachtchi’s resurgent form derailing after a terrible early oversight that left his position in ruins. With a score of 8.5/9, Abdusattorov remained confident but grounded, saying he had been sloppy the day before but balanced this out with an otherwise good form, so he assessed his performance so far as “normal”.

The day’s action had been set in motion by a very special guest, Prime Minister Katrin Jakobsdottir, who made the ceremonial first move in the game Fedoseev – Carlsen. Local hero Gretarsson decided this appearance was his lucky charm and finally transformed a good performance into a full point, defeating an overly determined So. This result means elimination truly looms for the defending champion – unless Gretarsson could also dent Nepomniachtchi in the final match of the day. 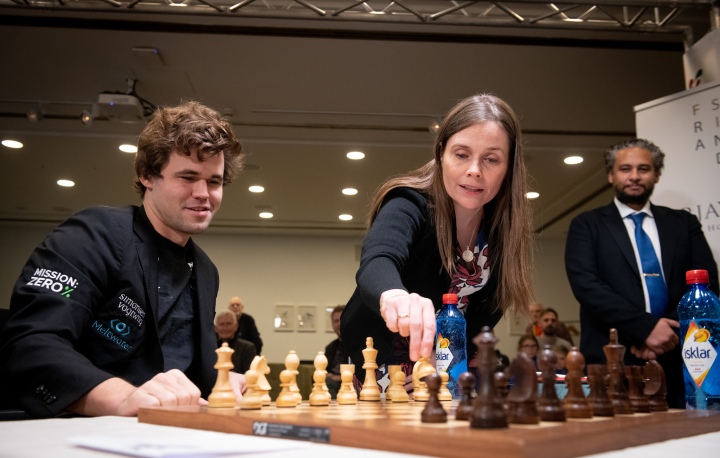 Gretarsson joked that he would have to ask the PM to attend all of his games. “I think I was a bit lucky, but it was overdue. Hopefully, it is a sign of better things to come,” he said.

Hikaru Nakamura continued to set the pace in Group B, beating Blübaum, while Fedoseev and Carlsen traded blows and split the point in a thrilling match where the inventive Fedoseev escaped defeat by spotting a spectacular stalemate combination. The result was a remarkable sixth consecutive draw for Fedoseev, despite a series of complex and ambitious games.

Almost anything can happen … but will it?

World classical chess champion Magnus Carlsen clarified the situation in Group B by finally managing to defeat Fedoseev, his first loss since their original encounter in the first game of the event. This meant that Carlsen and Hikaru Nakamura would advance to the semifinals, and their looming mini-match would determine the group winner. Carlsen noted that this could be significant, as winning the group would mean avoiding the currently unstoppable Abdusattorov in the semis. 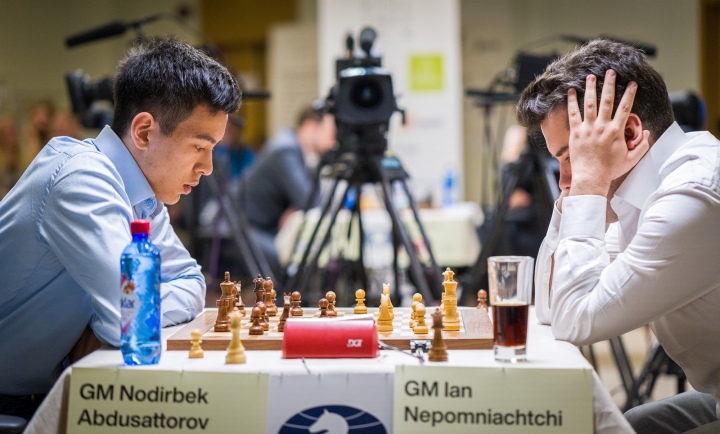 The teenager had earlier dismantled Nepomniachtchi yet again for a 4-0 sweep over his esteemed opponent and produced another sparkling example of his direct, attacking style.

Nakamura admitted that his lost concentration led to an oversight and nervous moment, but he retained enough defensive resources to weather his error and hold a draw and keep Blübaum from grabbing his first match point.

In the last Group A duel, So was putting in the longest office hours again and managed to grind out some revenge and tie his match with Gretarsson. Afterwards, the rueful defending champion gave the Icelander credit for his gritty fighting spirit, and So said that at least his own shaky performance had given local fans something to cheer about. 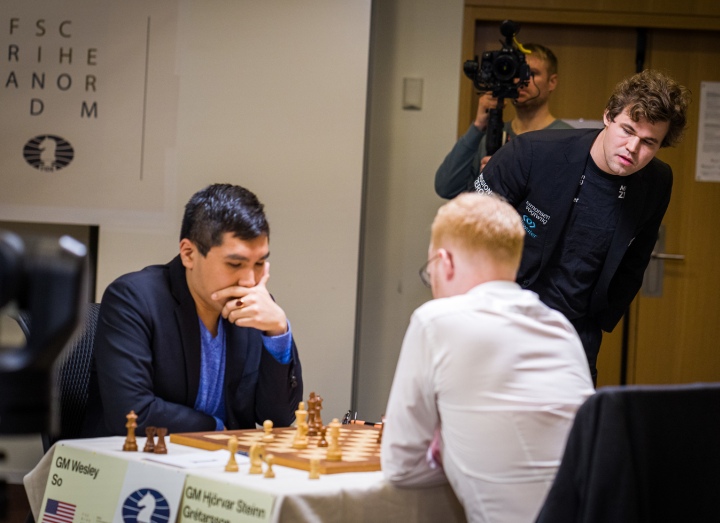 The last remaining drama would be whether upsets can change the race in Group A, where So still had a glimmer of hope of catching Nepomniachtchi, and the clarification at the top of Group B, which would determine who meets the seemingly irresistible force of Abdusattorov.

Match scores from Round 5: 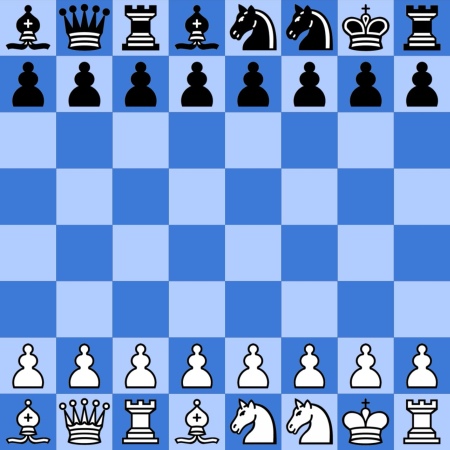 Magnus Carlsen amused himself during the unveiling of the final starting array by guessing which piece would land next on the graphics board, with no luck. The players had a positive reaction to what appeared, with the Americans giving comments. Nakamura said that this looked like a much more enjoyable position, which would be fun to play, while Wesley So smiled and said, “No knights in the corners!”

The final round matches largely followed expectations. Blübaum and Gretarsson suffered again, going down to Fedoseev and Nepomniachtchi, respectively. This meant that Nepomniachtchi was through to the semifinals, since even if everything left were to go So’s way, So would still be out on tiebreaks due to having lost his head-to-head meeting with Nepomniachtchi.

Pride at least at stake

So nevertheless signed up for a full working day, getting yet another advantageous ending to savour. He became the first person to topple Abdusattorov, outwitting the youngster in a subtle rook endgame. 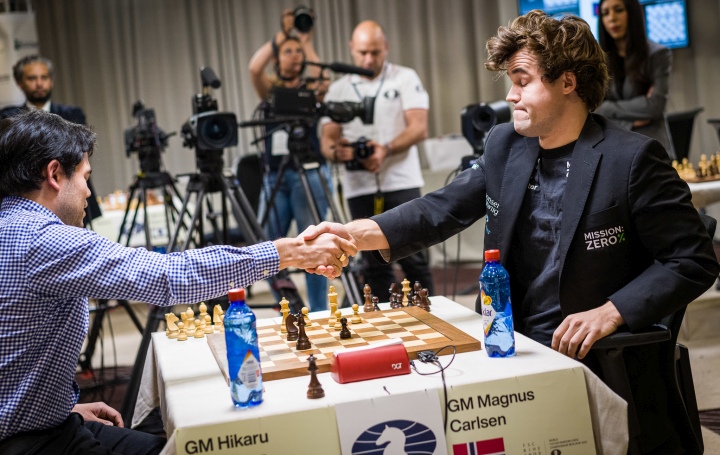 This left the traditionally epic duel between old rivals, Carlsen and Nakamura, as the only match with something at stake. Carlsen spent much of the first game on the ropes after Nakamura provoked the Norwegian into overextending, but the classical champion’s legendary defensive skills carried him to safety. He described his game as ‘all kinds of bad’ but saw his fight back as a silver lining.

Nakamura was projecting a typically relaxed mood, saying that there was really nothing at stake with them both through to the knockout stage, while Carlsen seemed fairly motivated to put off a meeting with Abdusattorov until a possible final. The return game was another torture session by Nakamura, and more cliffhanger defending from Carlsen. With their fourth head-to-head draw recorded, Carlsen won the group by the smallest margin, an extra half game point scored.

Blübaum won the final game to finish, vs. Fedoseev, when the latter ran out of time after a lengthy defense. This evened up the match and finally put Blübaum on the match point score-table. 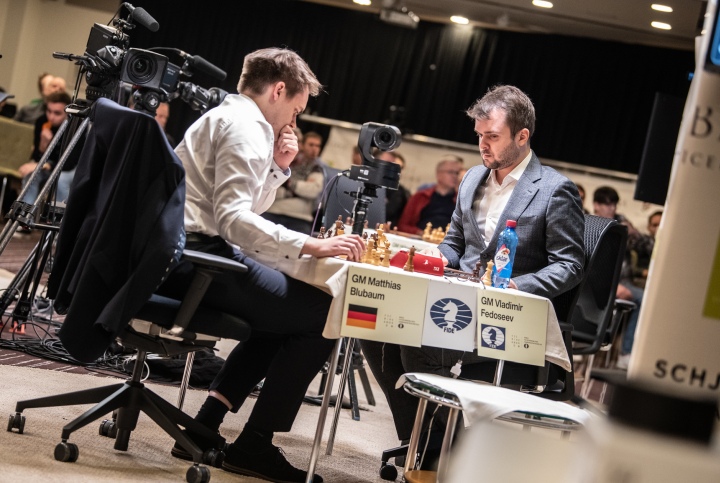 In Group A, So ended the preliminaries on a high note, clinching a mini-match victory over Abdusattorov with a well-fought draw, and showing a bit of his champion form against the tournament sensation.

Nepomniachtchi was pleased to have survived what he called a candidate for the ugliest position of the event. Gretarsson went too far once his advantage slipped and got nothing for his efforts.

Match scores from Round 6:

The semifinals will take place on Saturday, October 29. The 28th is a rest day.

The semifinal match-ups will be: Abdusattorov – Nakamura and Carlsen – Nepomniachtchi.

Each match in the Knockout Stage will be best-of-4 games.

In the event of a tied match, there will be an Armageddon game. The player with white will have 15 minutes and will need to win the game to win the match. Each player shall bid a number of minutes up to 15, and the player with the lower bid will have black and will only need to draw the game to win the match. If both players make the same bid, the arbiter will draw lots to decide the winning bid.

The loser of each semifinal will qualify for the 3rd Place Playoff.

The time control for each game is 30 moves in 25 minutes, plus 5 minutes for the rest of the game, plus 5 seconds increment per move starting from move 31.

Play is scheduled to start at 15:00 GMT, with the drawing of the first start position 15 minutes before. 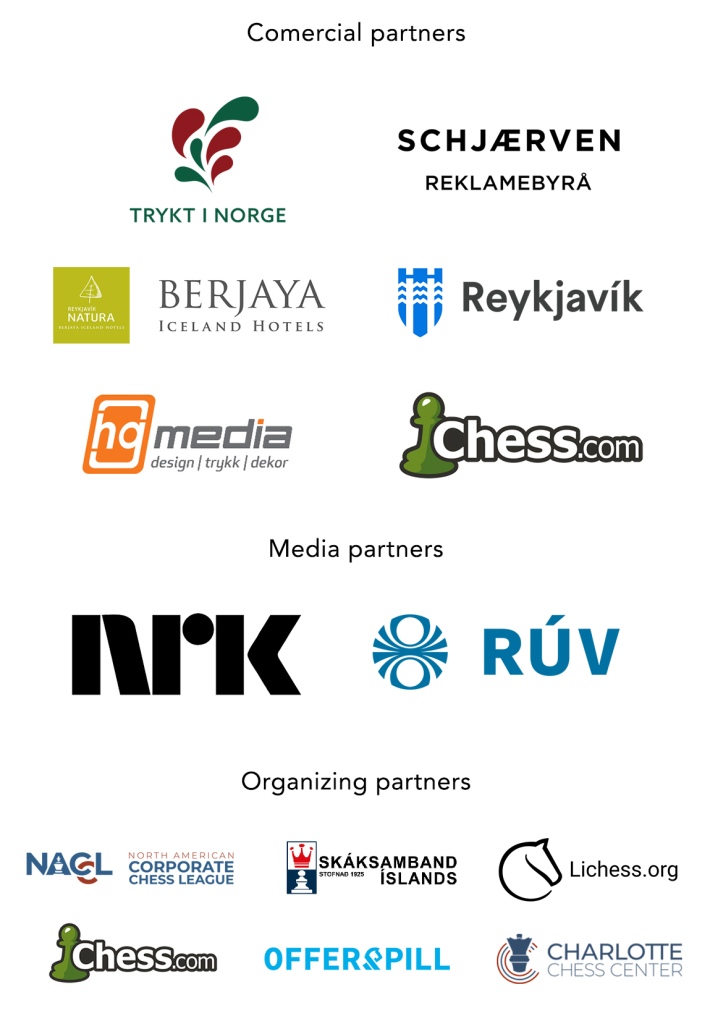