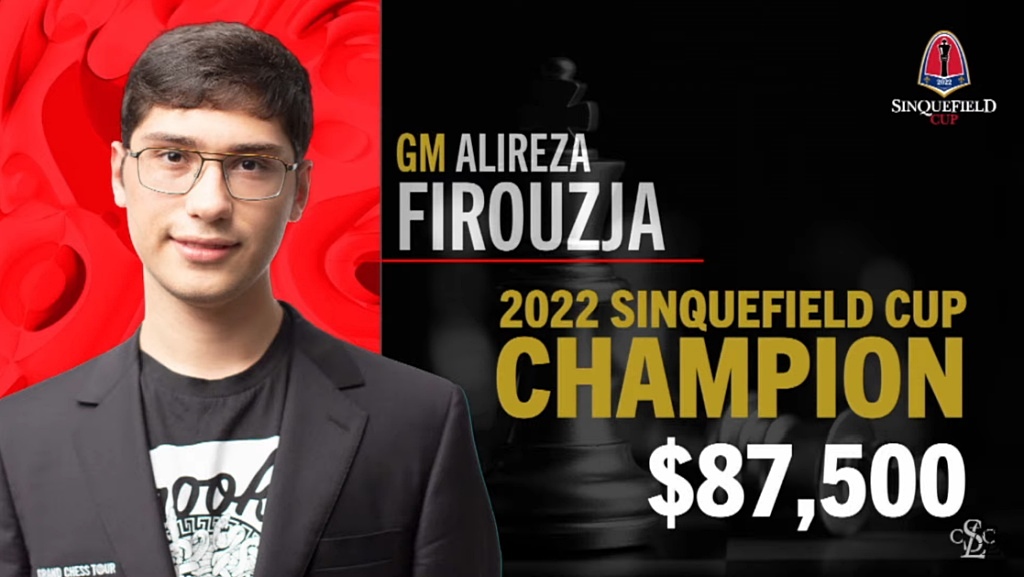 World No. 4 Alireza Firouzja clinched victory in the 2022 Sinquefield Cup after defeating Ian Nepomniachtchi 1.5-0.5 in a rapid playoff for the title, earning an extra $10,000 in addition to his $87,500 first place prize.

With his result in the Sinquefield Cup, Firouzja also emerged as the overall winner of the 2022 Grand Chess Tour, taking home a $100,000 bonus prize. Finishing second in the GCT was Wesley So, who earned a bonus of $50,000, while Maxime Vachier-Lagrave placed third in the overall standings. 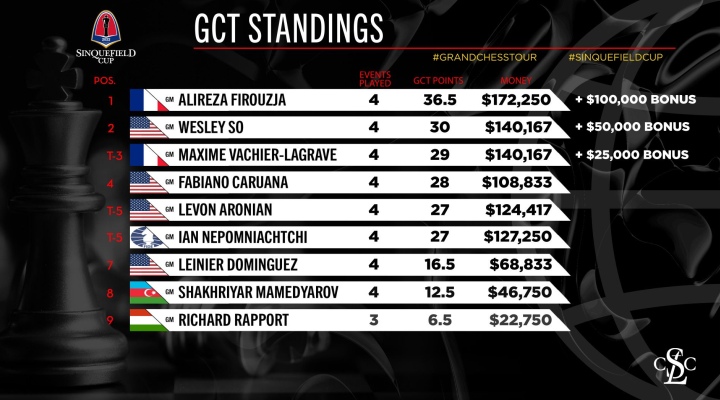 Firouzja’s sensational performance follows his impressive win in the Saint Louis Rapid & Blitz held late in August. “In general, the Grand Chess Tour is the toughest tour in the history of chess I think, so to win it is an amazing feeling and I cannot be more happy,” said Firouzja after securing tour victory with a draw against Maxime Vachier-Lagrave in today’s final round. 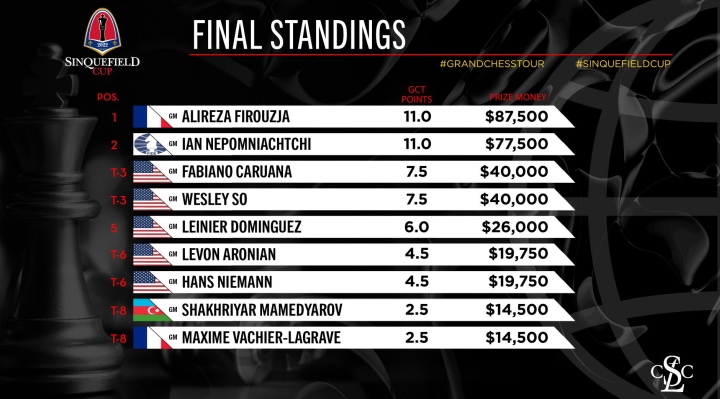 Firouzja’s last round game was fairly uneventful, as Vachier-Lagrave essentially forced a draw out of the opening in a 5.Re1 Berlin. Firouzja knew his theory well and the players traded down into a dead-drawn single rook ending. Thanks to this draw, Firouzja was able to clinch first in the overall GCT standings, with the Sinquefield Cup still very much undecided based on the results of the games of Nepomniachtchi and So. 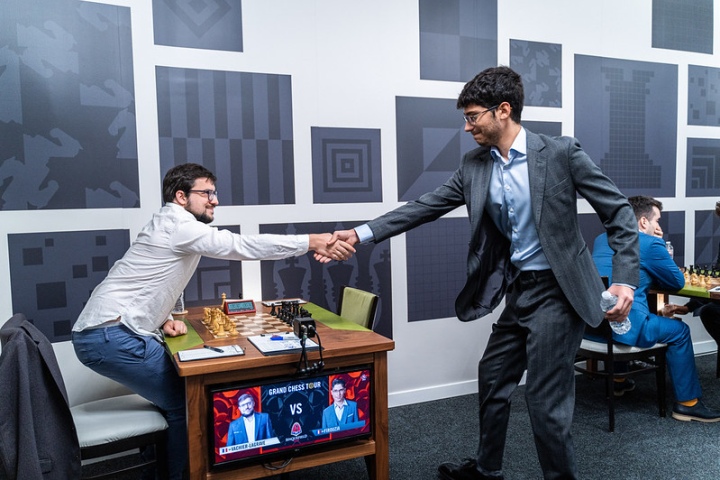 No more fist bumps! The handshake is back in vogue at top level. | Photo Courtesy of Saint Louis Chess Club, Lennart Ootes

After Firouzja’s quick draw, Nepomniachtchi had an opportunity to win the tournament outright with a victory over Niemann, who had been struggling over the last few rounds. A somewhat rare line in the English left Nepo with a much better structure in the endgame, and seemingly decent practical chances with a knight against bishop. But despite out-maneuvering Niemann and building up a decisive advantage, Nepomniachtchi somewhat inexplicably rejected an obvious capture of a pawn, opting to continue shifting his pieces around. This gave Hans a chance to consolidate his position and a few moves later Nepo blundered into a threefold repetition. 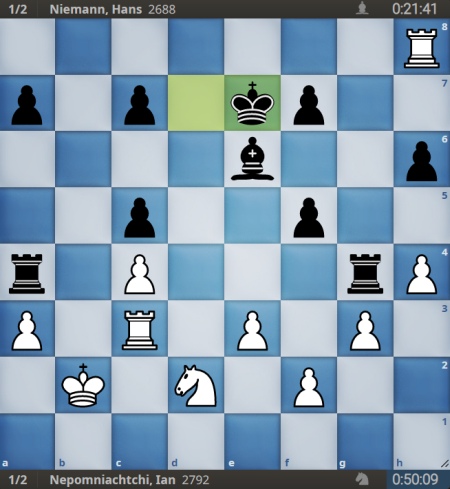 After 38…Ke7, rather than taking the h6-pawn with a winning position, Nepomniachtchi played the surprising retreat 39.Rb8?, giving Black time to consolidate and hold. 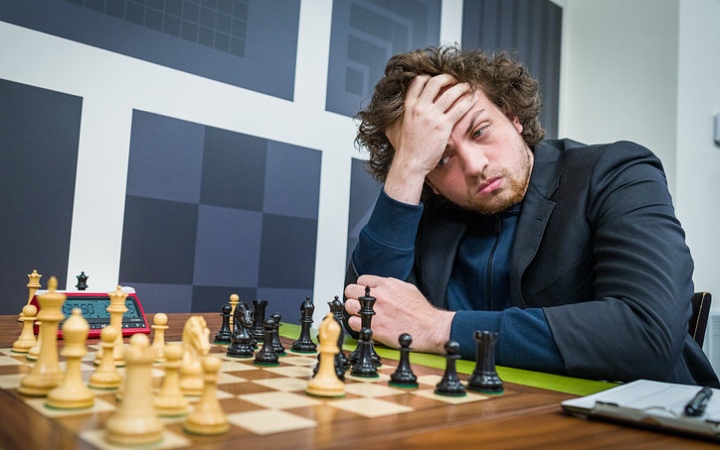 Niemann had a difficult position but managed to survive, finishing with a very respectable 3.5/8 in his first super-tournament. | Photo Courtesy of Saint Louis Chess Club, Lennart Ootes

With a win in the last game, So could catch up to the leaders and force a three-way playoff, but Dominguez’s play in a Queen’s Gambit Accepted was too solid, and So was unable to generate any serious winning chances out of the opening. Nevertheless with the draw, So was able to secure second place in the overall GCT. 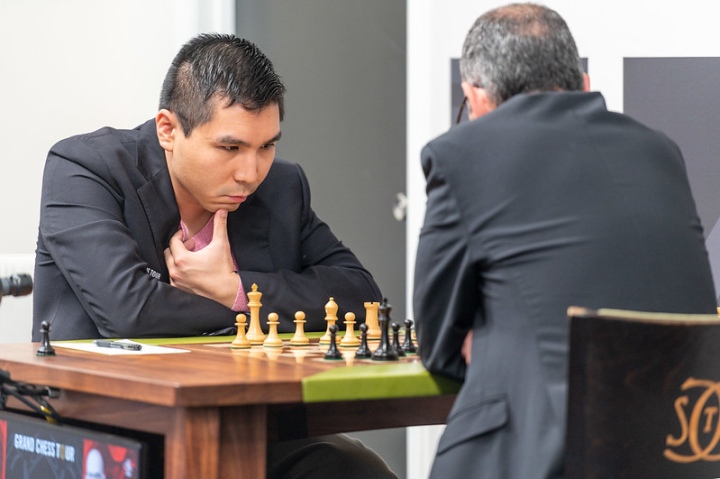 An exciting 4.Qc2 Nimzo led to the players’ castling on opposite sides of the board, with a very sharp position. But after accurate play by both Mamedyarov and Aronian, the middlegame fizzled out quickly, with mass exchanges leading to a drawn double rook endgame. 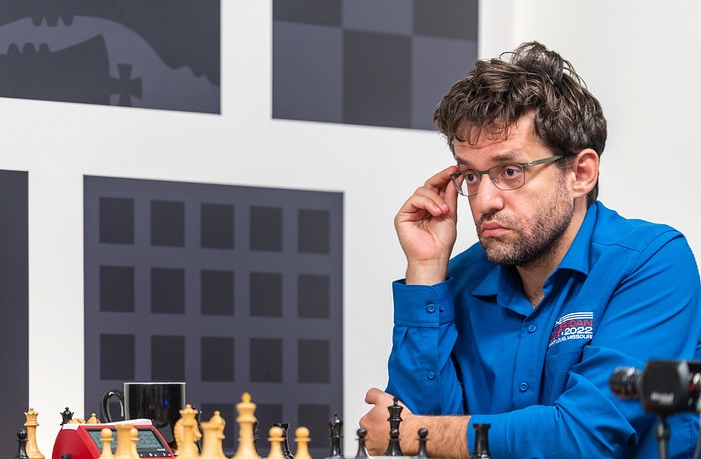 The first game of the playoff featured Nepomniachtchi’s pet Catalan, as the queens got exchanged early and it seemed like Firouzja had equalized comfortably. But a hasty decision (26…c5) by Firouzja gave Nepo the chance to establish a passed pawn, seizing a nice strategic plus. At this point, Firouzja started to defend well and Nepo lost his advantage when he allowed a trade of knights, leading to a rather drawish rook endgame. 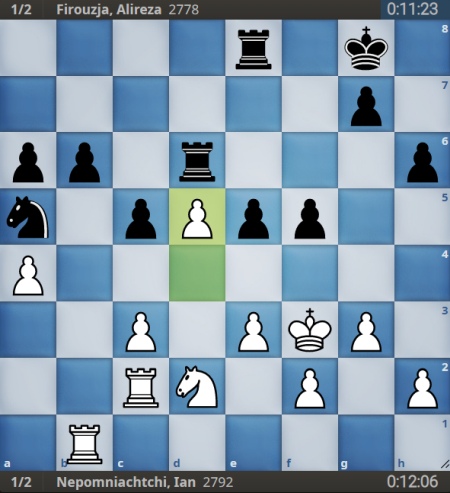 After 26…c5 27.d5!, White exerted some pressure, thanks to Black’s weakened b6-pawn, but this wasn’t enough to win the game.

In the second game, Firouzja grabbed the initiative early on, after an inaccurate move (7…Na6) by Nepomniachtchi on the Black side of an English. Things escalated quickly when Firouzja offered a pawn sacrifice in order to get his kingside majority moving, but rather than accepting the pawn Nepo blundered a piece with 16…Qe7, missing a simple tactic in response. Firouzja pounced on the opportunity and converted with ease, clinching the playoff. 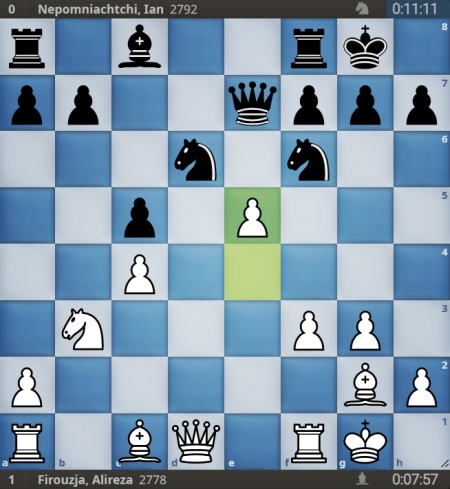 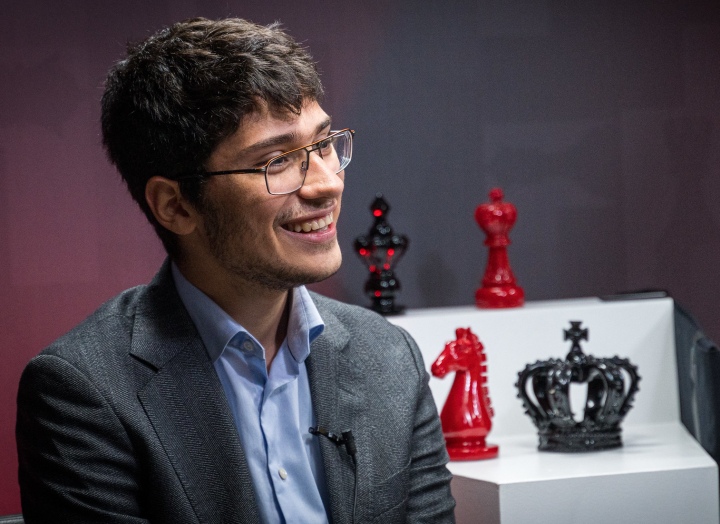