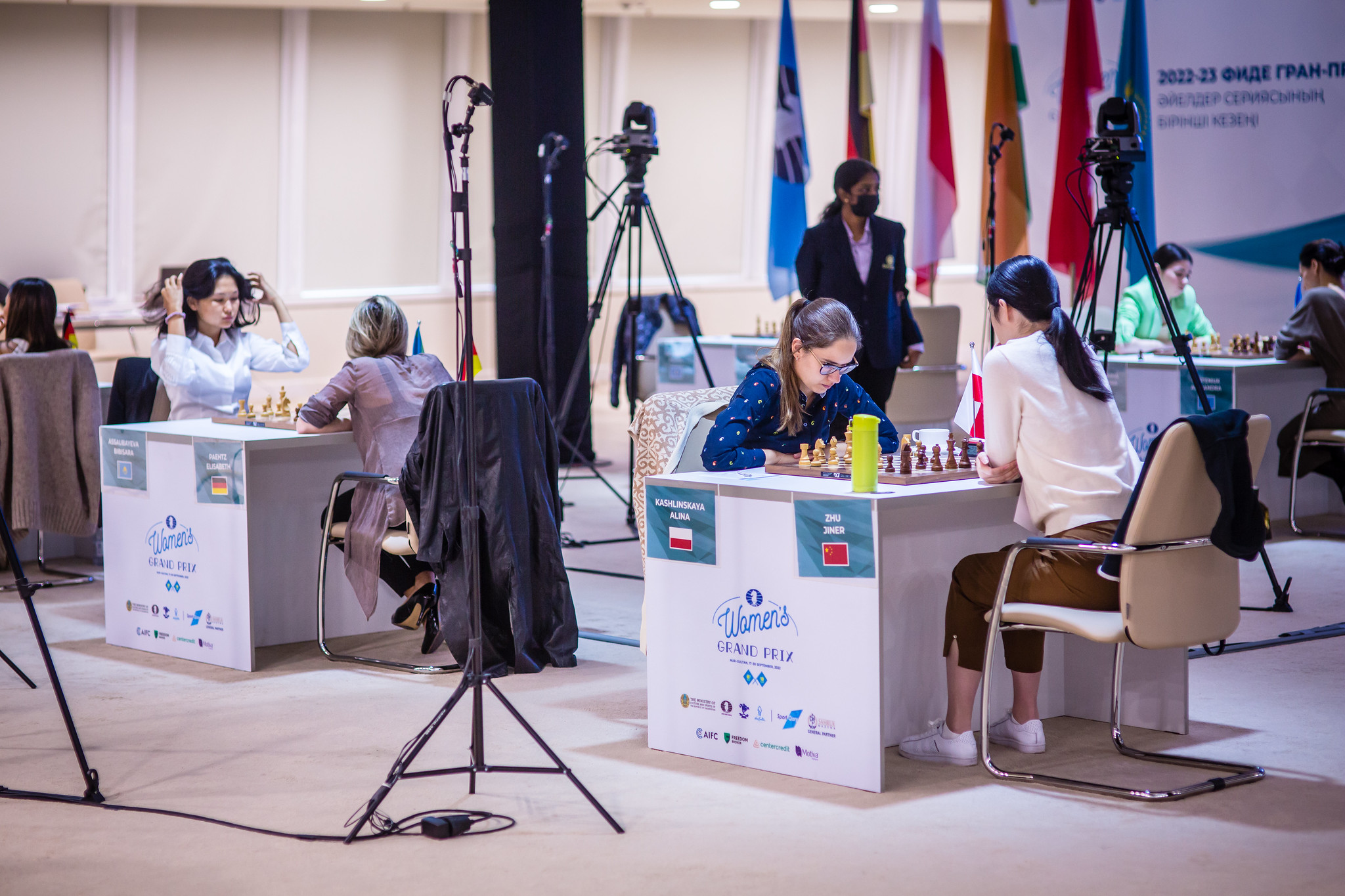 Kateryna Lagno leads the tournament with one round to go

The tenth round of the Astana Women’s Grand Prix started off with two very quick draws by three-fold repetition. One of them seemed like an intelligent strategic decision by Kateryna Lagno in an effort to retain her top position in the standings and pile the pressure on her main rival, Aleksandra Goryachkina.

With one round to go, Kateryna Lagno leads with 7½/10, Aleksandra Goryachkina is second with 7, and Zhu Jiner is third, sitting on 6 points. Tomorrow’s round will start at 1 pm instead of 3 pm and features several interesting match-ups.

Kosteniuk vs Lagno and Vaishali vs Goryachkina will be the two main games of the day in the fight for clear first, while Zhu Jiner will be playing with White for second place and possibly a GM norm. 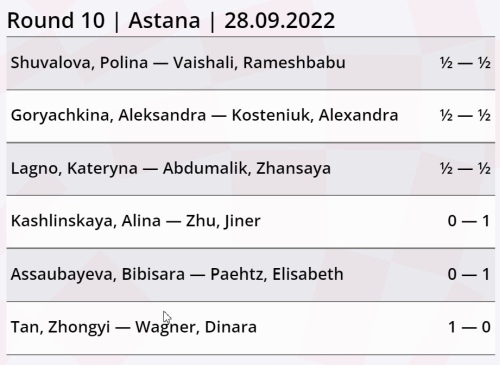 The round had practically just begun, and the first game ended in a draw. Playing with Black, Zhansaya Abdumalik, who already made a quick draw against Goryachkina yesterday, proposed the Zaitsev system in the closed Ruy Lopez.

Half a point ahead of her rivals in the standings, Kateryna Lagno probably thought it was a good idea to go for a well-known theoretical move repetition, forcing a draw and extending her lead to a full point with a round to go.

The second game to finish in a draw was also a quick one. Saved by the bell and arriving just on time to the venue, Polina Shuvalova went for a side-line against Vaishali’s Sicilian Sveshnikov, which leads to a forced perpetual check for Black. 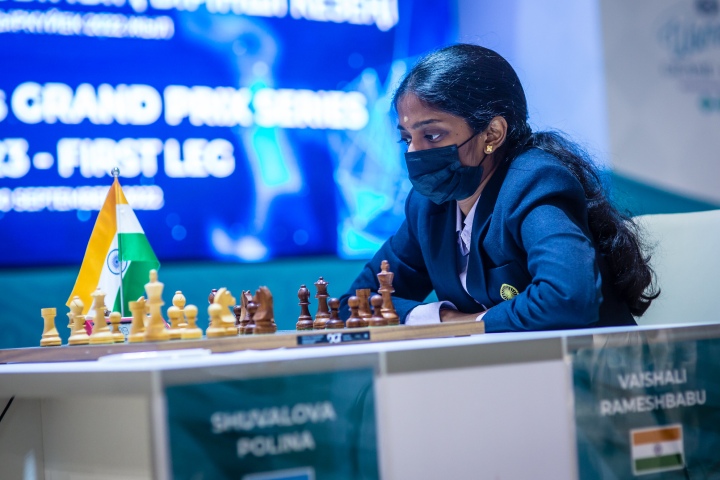 Both players blitzed out their moves, which makes me think that they were content with the decision, making a draw in less than twenty moves.

Undoubtedly the most important game of the round. Pressured from the start by Lagno’s draw, Goryachkina, who turns 24 today, needed a win to tie for first and go into the last round with options to win the tournament.

According to my database, previous encounters between both of them produced a head-to-head record of 9-7 for Kosteniuk, although a few of the games were played when Goryachkina was still a junior. Nonetheless, Kosteniuk eliminated Goryachkina in the 2021 World Cup final last year, a huge result for her. 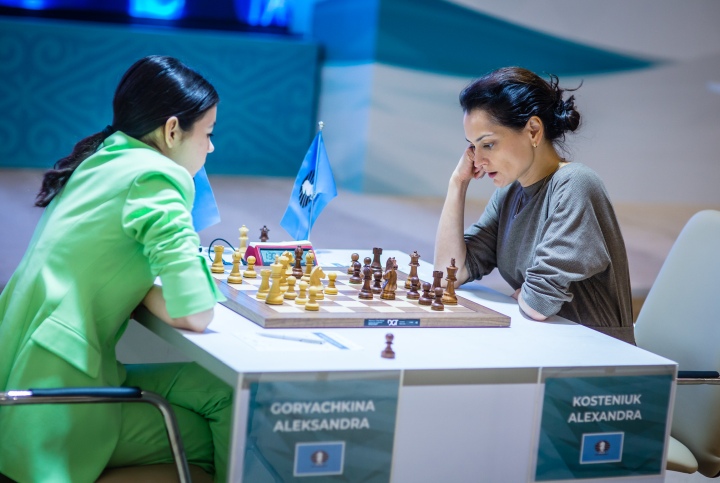 Kosteniuk went for the very solid Slav Defence main line and, slightly surprised, Goryachkina spent 8 minutes and chose the side-line 12.e5 – there are several more popular options such as 12.Bf4 or 12.Rd1.

The second key moment of the game occurred on the move fourteen when Goryachkina refrained from exchanging bishops on g6, weakening Black’s kingside. Kosteniuk seized her chance, exchanged most of the pieces on the c1 square and headed for an equal queen + knight ending in which both players agreed on a draw by three-fold repetition on the move thirty.

Alexandra Kosteniuk gave us her thoughts on the game in a short interview.

Poland’s number one female player Alina Kashlinskaya started off the Grand Prix in great shape, but she has been struggling to find her form in the last few rounds. According to my database, she had played twice against Zhu Jiner previously, a draw in the Chinese Team Championship in 2017 and a loss last year in the 2021 Grand Swiss. 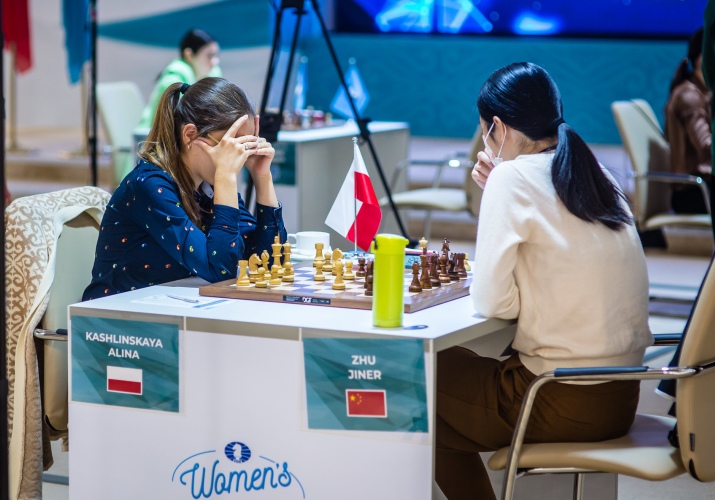 In today’s game, by move transposition, the position resembled a classical isolated d-pawn structure. While Zhu Jiner was preparing to blockade the d5 square and finish her development, Kashlinskaya uncorked a seemingly promising bishop sacrifice, destroying the kingside of her opponent.

She followed it up with a clean rook sacrifice that couldn’t be accepted because of mating threats. However, as Zhu Jiner explained in her post-game interview, she had it under control: although she was slightly worried, she didn’t think it was correct. The continuation of the game proved her point. 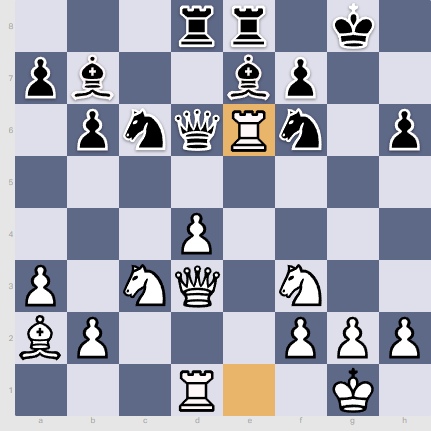 Although German’s number one female player hasn’t been in top form in Astana, she played a very nice positional game in the Carlsbad structure today with Black against Bibisara Assaubayeva. Her plan based on 26…b5 followed up by the kingside attack worked perfectly and netted her the full point in a key moment of the tournament.

In her post-game interview, Paehtz reflected on her opponent’s playing style and experience when deciding her game strategy. She also discussed some of the issues that top women players have faced since the end of the pandemic. 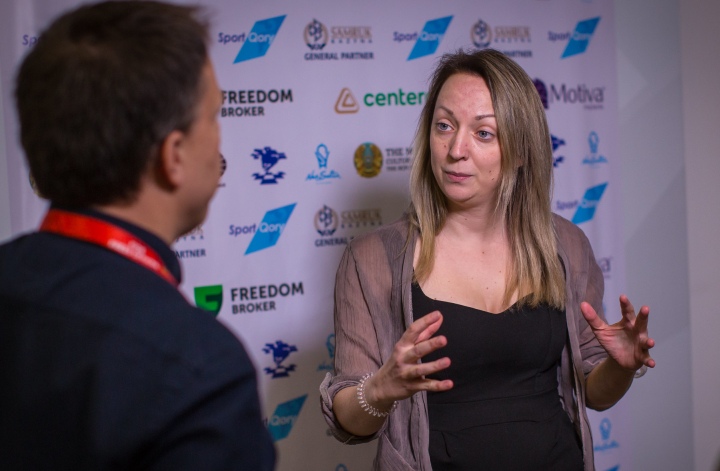 With her third win in the last four games, Tan Zhongyi made a huge step today to fight for fifth place in the tournament.

Playing fast and confidently, she prevailed over Dinara Wagner in a masterfully played two bishops against a two-knight endgame. In fact, as FIDE’s General Director GM Emil Sutovsky shared on Twitter, the ending has a striking similarity to game 23 of the 1951 Botvinnik vs Bronstein World Championship Match. 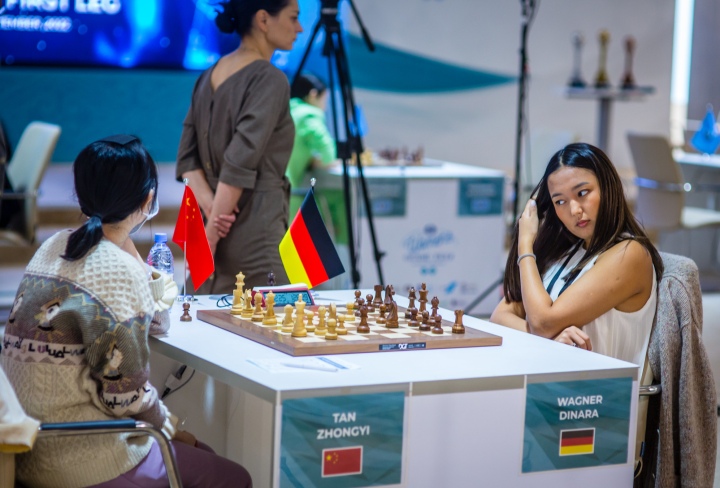 In her post-game interview, Tan Zhongyi discussed with Press Officer IM Michael Rahal her style of play and handling of the clock.