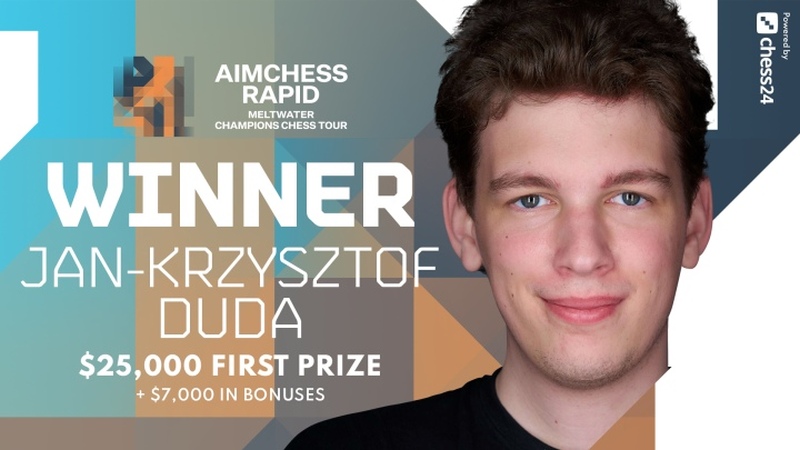 Poland’s reigning World Cup winner came into today’s second day of the final needing just a draw to secure the tournament after a 3-1 first-match win.

But Mamedyarov roared back to take the first two games of the second rubber. When Duda made the shock decision to take a quick draw in the third, perhaps to regroup, Mamedyarov was level and the match headed to tiebreaks.

It seemed a questionable decision from Duda, but it worked as the 24-year-old Pole took the first blitz tiebreaker and then Mamedyarov blundered in the second to make it game, set and match. 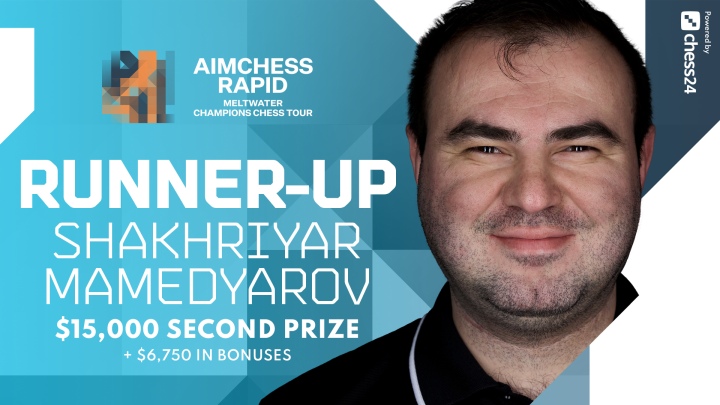 Duda was typically hard on himself afterwards, despite the win.

“I’m extremely happy and joyful that I’ve managed to win the tournament,” he said. “But today’s performance was very, very bad I think and I would like actually to forget about the games I played in rapid…”

The result was fully deserved for Duda. He topped the leaderboard in the all-play-all prelim stage and then knocked out Tour Champion Magnus Carlsen in the semis. Duda then outplayed the in-form Mamedyarov, who had a brilliant tournament himself.

Grandmaster David Howell said Duda was simply the best player in the event: “He showed it in the prelims, he started fast, he kept it up every day and despite the dips which are inevitable in any player’s tournaments, he finished on a bang as well. Those blitz games, despite what he says, were very impressive.”

Shakh’s explosive comeback started with a bang in Game 1 but sadly ended in a blunder in the blitz tiebreak.

Under huge pressure in the first game, Shakh gave up his queen for a rook with 22…Bxc4. Duda was streets ahead according to the computer, but the Azerbaijani had set him problems down the line. 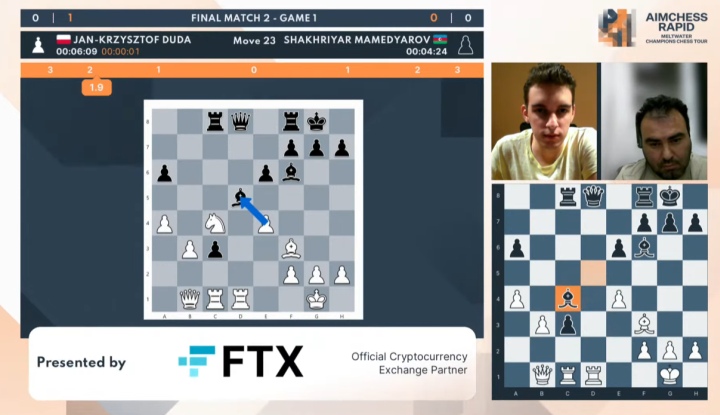 Shakh, playing from Baku in Azerbaijan, found one last card to play and launched an imaginative rook attack that crashed though to set up a win. Duda resigned after 34…Be1+.

The second game was even more thrilling. Shakh sacrificed a knight to blow Duda’s defence wide open with 13. Nxe6. Shakh castled to get his king to safety and then, with Duda’s king still stuck in the centre, swung his queen over to open a new angle of attack with the killer 18. Qh3. 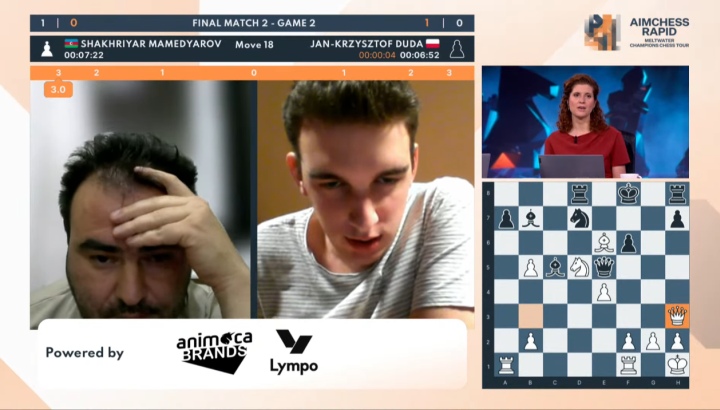 Duda’s defenses collapsed. Shakh had won two games in a row and now needed just a draw to level the score in matches and take the final to tiebreaks.

Everything rested on the final game but Duda shocked everyone. Rather than try to win two games on demand, Duda decided to force a draw with a well-known quick 14-move drawing line in the Italian Opening. Both players headed straight to the blitz playoff.

If Duda did it to get off his tilt, it worked. The first blitz tiebreak was over in 20 moves as Shakh went for a trick with the double-attack 19. Be8, but it backfired as Duda played the calm 19… Bg6 attacking three pieces at once. Shakh threw in the towel and resigned. 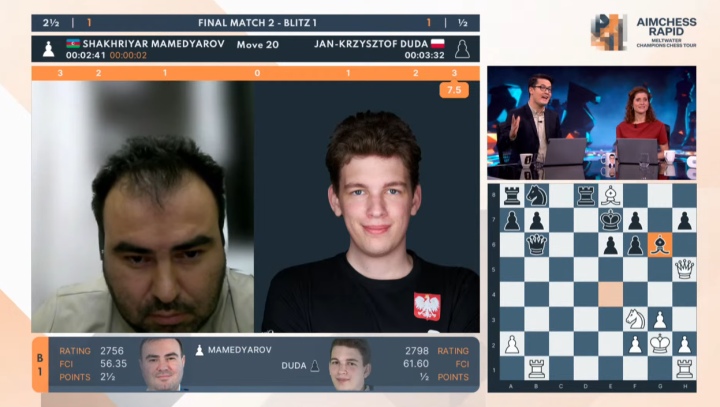 The Azerbaijani number 1 needed to win the second on demand but blundered badly before Duda found the knockout blow with 32. Rxc4.

Duda is now second on the 2022 Meltwater Champions Chess Tour leaderboard going into the final event next month in San Francisco with Magnus Carlsen already having sealed the overall Tour title.