GM Kateryna Lagno defeated the defending champion, GM Hou Yifan, in the final of the FIDE Chess.com 2022 Women’s Speed Chess Championship on Friday, September 2. It was a riveting duel of two worthy opponents that came down to the wire in the end.

Lagno pulled ahead in the first 5+1, but some connection problems coupled with Hou’s determination and resilience did not allow her to win this stage (4.5-4.5). It should be noted that Hou showed real sportsmanship and agreed to add her opponent two minutes on the clock after Katerina got disconnected.

Hou Yifan grabbed the lead in the 3+1 portion in which the opponents exchanged heavy blows and kept it to the very end, winning the second segment by a minimal margin of 5.5-4.5.

Lagno immediately levelled the score in the final 1+1 stretch and then stringed together three victories and broke away. Hou responded with two straight wins sending the match to the last decisive game. Needing a victory to reach Armageddon, she spent precious seconds in a very complicated endgame and eventually forfeited on time. 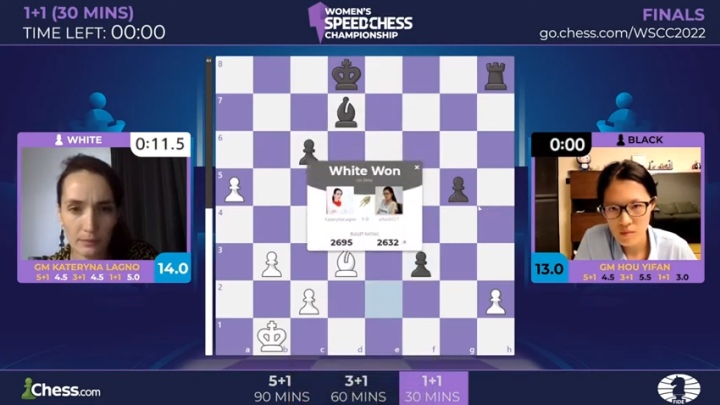 In her short post-game interview with Alexandra Kosteniuk and Irina Krush, Lagno shared how she coped with the connectivity issue: “Everything was quite good from the start, but then I got disconnected, and somehow I just couldn’t put myself together after that. I understand that happens to Chinese players quite often, but I was like: ‘Not today! Not now!’ And then… it was always a very close match.” 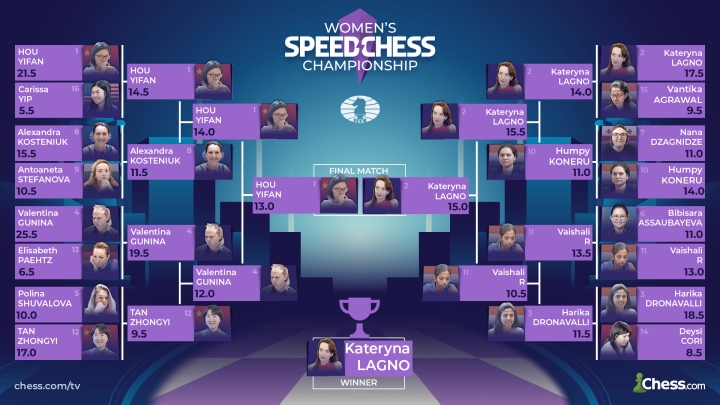 The FIDE Chess.com 2022 Women’s Speed Chess Championship is an online event where titled women players will play a series of blitz and bullet matches for a share of the $70,000 prize fund.