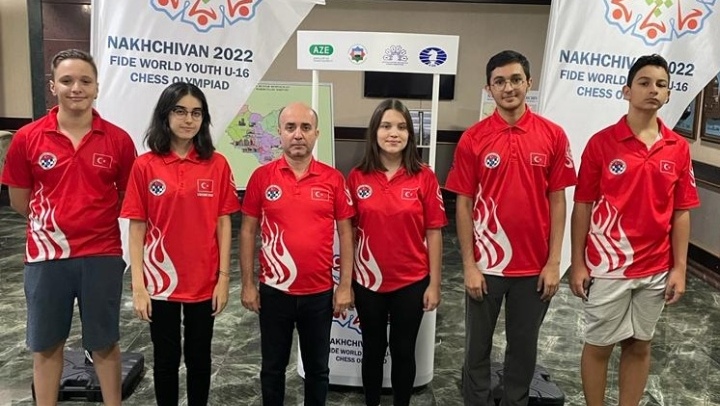 FIDE World Youth U-16 Chess Olympiad 2022 finished in Nakhchivan, Azerbaijan, on October 10. The 9-round Swiss tournament with classical time control brought together 34 teams from 22 countries.

The fifth-rated Turkiye-Red swept the field, winning the event with one round to spare. The FM Eray Kilic (2428, board 1) won all the matches. Both FM Hasan Huseyin Celik (2323) and FM Taha Ozkan (2299) had a fantastic event, scoring 8 and 7,5 points, respectively, and showing the best result on Boards 2 and 3. WFM Gulenay Aydin (2109) and Hatice Asli Mustu (1896), on boards four and five, also contributed to the overall success.

Uzbekistan-1 claimed silver medals. Led by IM Mukhiddin Madaminov, they won 7 matches, including important victories over India and Kazakhstan, and made one draw with eventual bronze-medalists Azerbaijan-1. Board 2 of the Uzbekistan team, FM Khumoyun Begmuratov, scored an impressive 8 out of 9.

Azerbaijan-1 lost two matches and thus could only settle for third place. Apart from losing to Turkey-Red (like any other team), the host nation’s teenagers were also defeated by Kazakhstan. All team members showed balanced performance, while Narmin Abdinova (1810, board 6) stood out with 7 out of 8 – the best performance on board 6.

Initially among top-3 rated teams, Iran and India did not have the best event, finishing 6th and 5th, respectively. Nevertheless, the leader of the Indian team, IM Pranav V, showed the best performance on board 1, with a performance rating of 2615. Iran’s board 4, FM Sina Movahed, also won his board’s competition, but this was not enough for the overall team’s success. Kazakhstan, which narrowly missed the podium, can boast of the best Board 5 performance accomplished by CM Sauat Nurgaliyev.