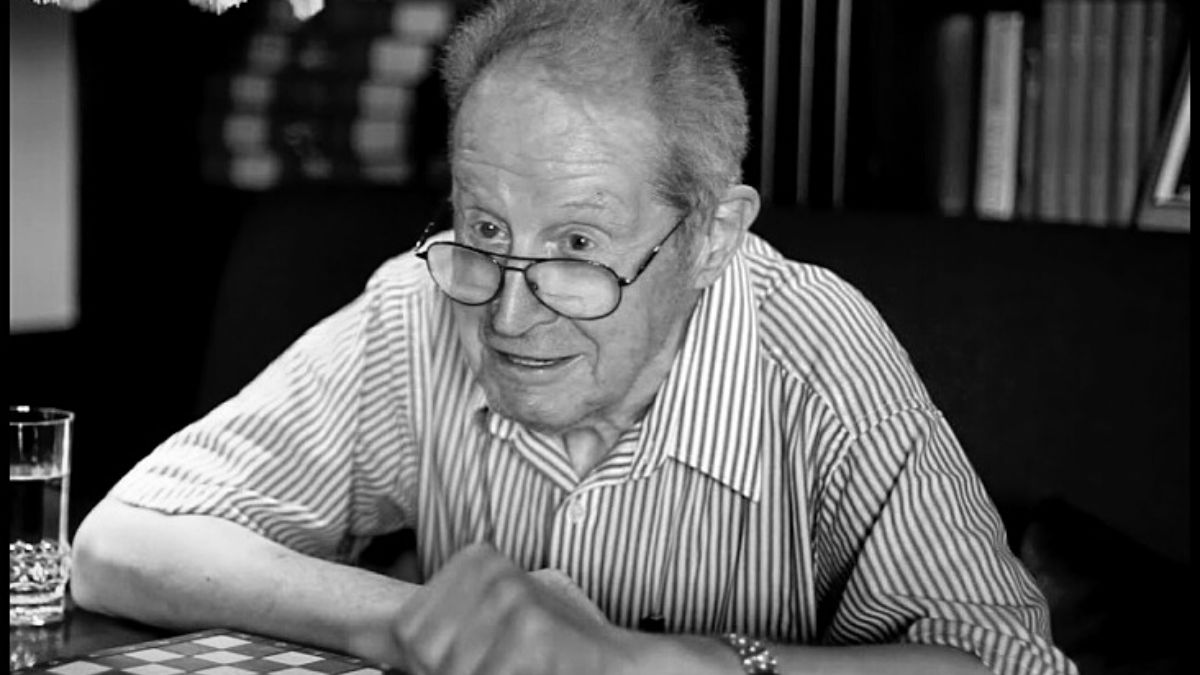 The legendary Grandmaster Yuri Averbakh, who had celebrated his centenary in February, passed away in Moscow.

Averbakh started to play chess at the age of seven, but it was just one more hobby for him during his first years, and he didn’t really take it seriously, with volleyball being his main interest. Then, in February 1935, he had the chance to meet the famous chess composer Nikolai Grigoriev, at a time when Moscow was hosting its second international chess tournament, with Capablanca, Lasker, Botvinnik, and many others. “Grigoriev gave a lecture in the club, showing some of his famous pawn studies. They made an enormous impression on me, and that was the first time I sensed that chess wasn’t simply a game but was something more, that it was an art. And I also had the urge to master that field. That’s how I got involved in chess.”

Finally hooked on chess at the age of 13, his first great success came three years later when he won the Soviet Union’s championship for schoolchildren. However, his incipient career would come to a halt, along with most chess organized activity, due to the World War II. He was evacuated with all his school from Moscow to Izhevsk, barely avoided being recruited himself when he reached the required age, and he would only return to Moscow in 1943. 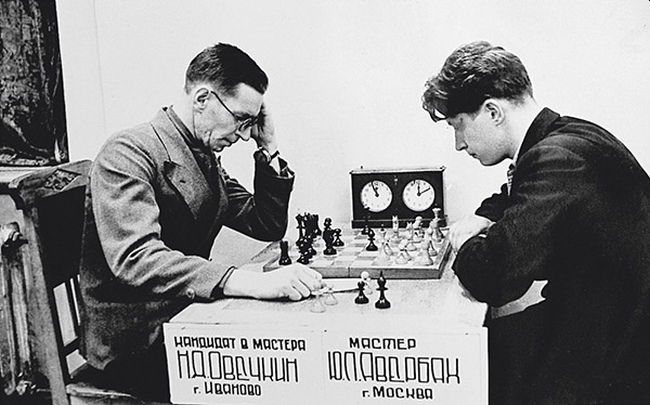 Yuri Averbakh at the tournament in Ivanovo (1944)

It was then that his career took off, gaining in strength until he won the Moscow Championship of 1949, ahead of a strong field that included Andor Lilienthal and Vladimir Simagin, among many others. This was his first major success and the beginning of a decade in which he became one of the top players in the world, probably one of the top-10 at his peak. He won the Moscow Championship again the next year, and in 1952 he earned the Grandmaster title – a title he has borne for almost 70 years!

Averbakh finished 5th at the Stockholm Interzonal Tournament in 1952, qualifying for the legendary Zurich 1953 Candidates Tournament, where he finished in 10th place. The next year, in 1954, he became champion of the USSR, and in 1956 he was very close to repeating this feat, sharing 1st-3rd places with Taimanov and Spassky, and ending up in second place after a tie-break stage.

In his collection of selected games, published by Cadogan, Averbakh says that he learned chess “the wrong way round”, becoming a strategist before he learned properly about tactics and combinations. A very solid player, pure attack players would often feel uncomfortable when playing against him: Rashid Nezhmetdinov, for instance, was only able to get one draw in the nine games they played. 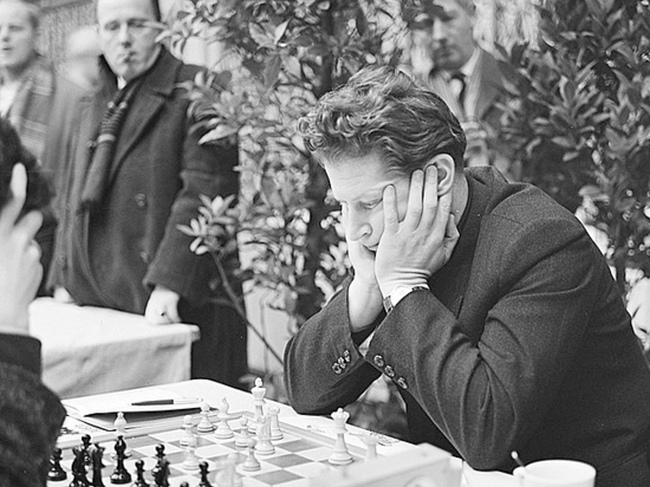 Averbakh reduced his competitive activities when he reached his forties, leaving behind numerous victories in international events all over the world, like Jakarta, Rio de Janeiro, Adelaide, and Vienna. His latest international success was the Rubinstein Memorial held in Polanica-Zdroj in 1975.

He shifted then his interest from playing the game to studying the game. And in that, he was as successful, or even more, as he was as a player. “My investigative character forced me to make a serious study of the endgame, that phase of the game where individual pieces battle against each other. Initially, I published several articles and then thought about a book devoted to various types of endings.”

His endeavour turned into a monumental work, the first systematic study of the endgame in history, published in five volumes. “So many generations grew up with Averbach that we stopped feeling the importance of what he did for chess,” said Emil Sutovsky, FIDE’s Director General. “Averbakhs’s Five Books have been studied by chess players of all levels for decades. And the wonderful book “Journey to the Chess Kingdom” co-authored by Michael Beilin has been read by hundreds of thousands of children, including many future strongest players in the world.”

Tall and athletic, Averbakh was physically gifted from his youth, and he cultivated his body as much as his mind. Volleyball was the first sports activity he took up seriously, taking advantage of his height. He also loved hockey and skiing – two national passions in Russia. Not so well known is the fact that, for a short period, he was also a regular at the boxing ring. “In our yard, there was a club which was turned into a dormitory for workers. It was a real rabble, where a cult of strength reigned. Therefore, if you wanted to be equal in the yard, you had to be able to give as good as you got. That’s why I took up boxing for a year,” Averbakh said in an interview with Vladimir Barsky and Eteri Kublashvili on the occasion of his 90th birthday. 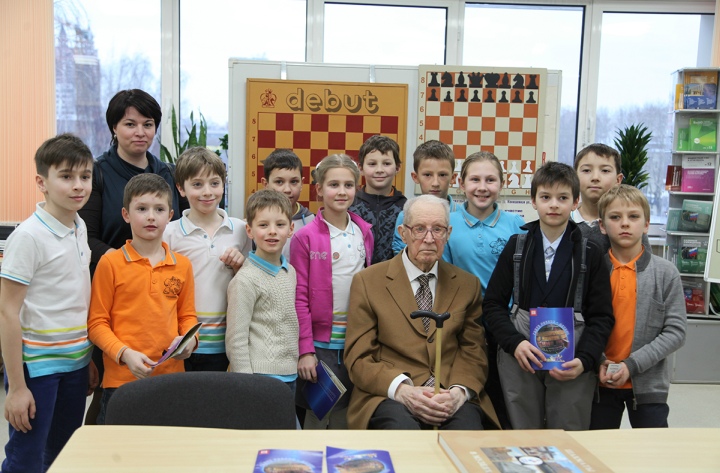 While all this explains his longevity, it is very likely that keeping mentally active also played a huge role. He was one of those people who basically never retired and kept working as much as his health allowed. As late as 2016, he would still visit the Central Chess Club at Gogolevsky boulevard every Wednesday to meet with young talents and offer them advice.

Averbakh was very fond of working with young people, but he also kept in mind the seniors and, with that intention, he found a chess centre in a library. “We were looking to attract older people to the game,” he explained in an interview with Dagobert Kohlmeyer. “They should not play in tough tournaments but rather spend their time-solving chess problems. Working with studies helps prevent Alzheimer. If you are over seventy, the stress of a tournament can be dangerous to your health. (…) But a calm and reflective attitude to chess is very useful, especially when you are very old.”

Apart from authoring theoretical articles and books, Averbakh also composed more than 100 endgame studies and devoted a great deal of time to promoting chess. He was chief editor of the “Chess Moscow” newspaper, “Chess in the USSR” and “Chess Bulletin” magazines. He also ran a chess show on TV at a time when the game enjoyed enormous popularity in the USSR, and thousands of people in the Soviet Union learnt to play thanks to him. 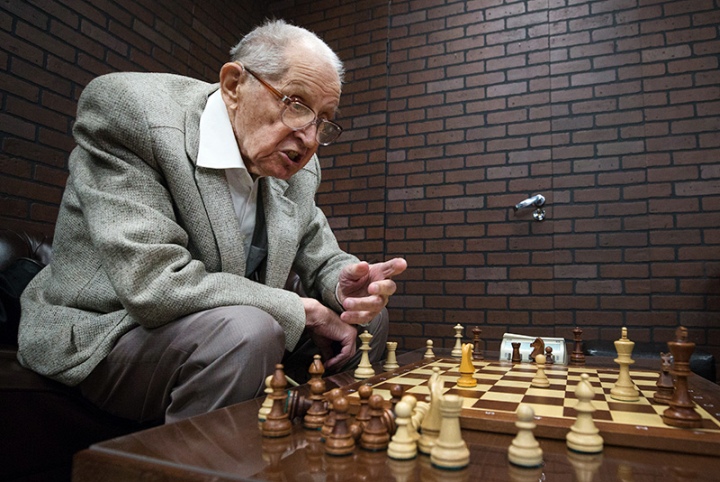 In the period between 1972-1977, Averbakh chaired the Chess Federation of the USSR, and was a FIDE delegate for many years. Highly respected by the entire chess community, he also served as an international arbiter in top events, being one of the three arbiters at the 1984-85 match between Karpov and Kasparov.

It would be fair to claim that none has ever devoted so much time and work to chess, in so many areas, as the prolific and multifaceted Yuri Lvovich Averbakh.

FIDE extends its sincere condolences to Yuri Lvovich’s family, friends, and loved ones.